Managed care organizations were almost unknown in the mental health arena two decades ago; now they dominate the financing and delivery of mental health services in both the public and private sectors. While this transformation has brought some hope of controlling costs and resources, many people — from policymakers and health care professionals to consumers and advocates — fear that access and quality have been sacrificed along the way.

The counterbalance to these marketplace inequities is public intervention through mandates and regulation. These, in turn, require good information to guide policymakers and providers. But until recently there was little information about the impact of managed care on access and quality; the field of mental health did not have a forum for discussing its concerns about fairness and equity; and there had been virtually no research on the effectiveness and efficiency of mental health policies and services.

In response to these concerns, the Foundation launched the Network on Mental Health Policy Research. Its charge was to develop a knowledge base linking mental health policies, financing, and organization to their effects on access to quality care.

Network members were practitioners and policymakers in the fields of psychiatry, psychology, sociology, pediatrics, economics, business, and law. Since the establishment of the Network in 1999, its focus shifted from access to mental health services, to the quality of those services, to its final focus: access to high-quality services across multiple service settings.

In earlier research, the Network found that mental health care is complicated today by its expansion from traditional settings to service sectors that are not designed or prepared to deal with people with mental illness. The Network’s subsequent projects were organized around those settings:

Specialty mental health services. In the public sector, the Network looked at states that implemented evidence-based practices, examining the barriers that make it difficult to sustain such practices, and seeking strategies that can overcome those barriers. In the private sector, the Network developed tools and methods that can provide objective answers about the effects of managed care on access to mental health care.

Social insurance. Many people with severe mental illness depend on federal income supports such as SSI, SDI, and TANF. Meanwhile, the government is enacting legislation aimed at returning adults in these programs to work. The Network looked at how — and how well — these incentives and sanctions work for people with mental illness.

Criminal justice. Like state hospitals of previous eras, jails have emerged as institutions of last resort for people with mental illness. There is increasing interest in “jail diversion programs” for those who have committed non-violent offenses, though research has shown existing programs offer few clinical gains. The Network studied whether diversion to evidence-based treatment programs can improve outcomes for patients and increase public safety. Members will also studied the costs and benefits of such programs, and the factors that enhance or impede their implementation.

Schools. Schools have become the primary site for identifying and treating (or referring) children with mental illness. Yet most of these children don’t receive evidence-based treatment. In collaboration with another Foundation research network (the Network on Youth Mental Health Care), this Network developed methods to study the effects on academic performance and other outcomes when children are provided with various evidence-based interventions.

A major accomplishment of the Network’s first phases was a monograph examining the first 50 years of mental health policy and the well-being of people with mental illness. That study provided the framework and foundation for the activities described above. Other Network projects produced practical guides on evidence-based practices for program managers and policymakers, new measure of important concepts like equity and quality, policy recommendations to guide managed care and social insurance arrangements, and models for introducing evidence-based practice into the criminal justice, juvenile justice, and education systems.

Perhaps most important, though, is the Network’s role in establishing mental health policy as a serious subject for research, discussion, and action. For example, its research demonstrating that parity in mental health benefits is affordable played an important role in shaping federal and state parity legislation. The Network’s thinking also played a direct role in landmark reports by the Surgeon General and the President’s New Freedom Commission on Mental Health — on issues such as the fragmentation of mental health services, the impact of managed care, the gap between science and practice, and the value of mental health care itself. As the Network continued to identify effective policies, members expected to see many of those policies adopted in practice.

For additional information, contact the Program Administrator, Program on Human and Community Development, (312) 726-8000 or [email protected] 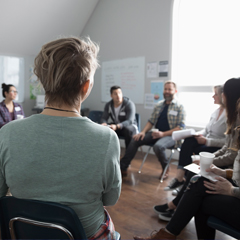