Testing the capacity of art to make human experience available for critical reflection and to effect social change. 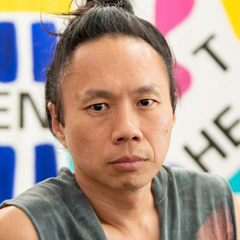 Paul Chan is an artist striving to express humanity’s complexities and contradictions through an artistic practice that moves across media. He makes drawings, sculptures, and digital projections; writes essays on culture and history; ran a publishing enterprise; and staged a play. He draws on a wealth of cultural touchstones—from classical philosophy to modern literature, critical theory, and hip-hop culture—to produce works that respond to our current political and social realities, making those realities more immediately available to the mind for contemplation and critical reflection.

Among Chan’s earliest works are digital animations, including Happiness (Finally) After 35,000 Years of Civilization (after Henry Darger and Charles Fourier) (1999–2003). Here, utopian fantasies are met with the human capacity for violence. His early animations led to a series of digital projections that reflect on religion and social upheavals. Called The 7 Lights (2005–2007), the works in the series feature animated silhouettes moving across a plane of light projected onto the floor. In 1st Light, for example, the dark forms of birds, cellphones, cars, and other objects float upward amidst utility poles and powerlines. At other points, the silhouettes of human bodies drop down, recalling images from September 11. Themes of technology, salvation, destruction, and rebirth emerge from this interplay of light and darkness. Chan’s next major project was a presentation of Samuel Beckett’s Waiting for Godot (2007) in the streets of New Orleans’ Lower Ninth Ward in the long aftermath of Hurricane Katrina. Developed in close consultation with local residents, the production became a way to inspiring and facilitating communal activity. Chan’s efforts to direct financial support to local organizations as part of the project tested art’s utility in the context of catastrophe.

In 2009, Chan stopped making art in the traditional sense, for a time, and devoted his attention to founding and operating a publishing enterprise. His press, Badlands Unlimited, disseminated the work of other artists and writers and provided a platform for experimentation with new digital forms. Upon returning to artmaking, Chan began experimenting with moving, three-dimensional forms. Breathers (2017–ongoing), a series of inflatable fabric sculptures that move as they fill with air, draw inspiration from conceptions of spirit found in Greek philosophy. Their movements conjure a range of emotional and psychological states, from futility and despair to exuberance and joy. His latest efforts have focused on drawing, and for a recent body of work, the artist rendered everyday objects and basic concepts in black outlines drawn with his non-dominant hand. In these works, Chan considers the capacity of visual representation to produce and convey meaning at a fundamental level. Chan is deeply committed to exploring art’s essential nature and purpose, and his work aims to enable viewers to see with greater sensitivity the world in which we live.

Paul Chan received a BFA (1996) from the School of the Art Institute of Chicago and an MFA (2002) from Bard College. His work has been exhibited in solo and group exhibitions at such national and international venues as the Museum of Modern Art, New York; The Drawing Center, New York; Walker Art Center, Minneapolis; Museum of Cycladic Art, Athens; Pennsylvania Academy of Fine Arts, Philadelphia; Solomon R. Guggenheim Museum, New York; and Schaulager, Basel. He is also the founder and publisher of Badlands Unlimited (established 2010). 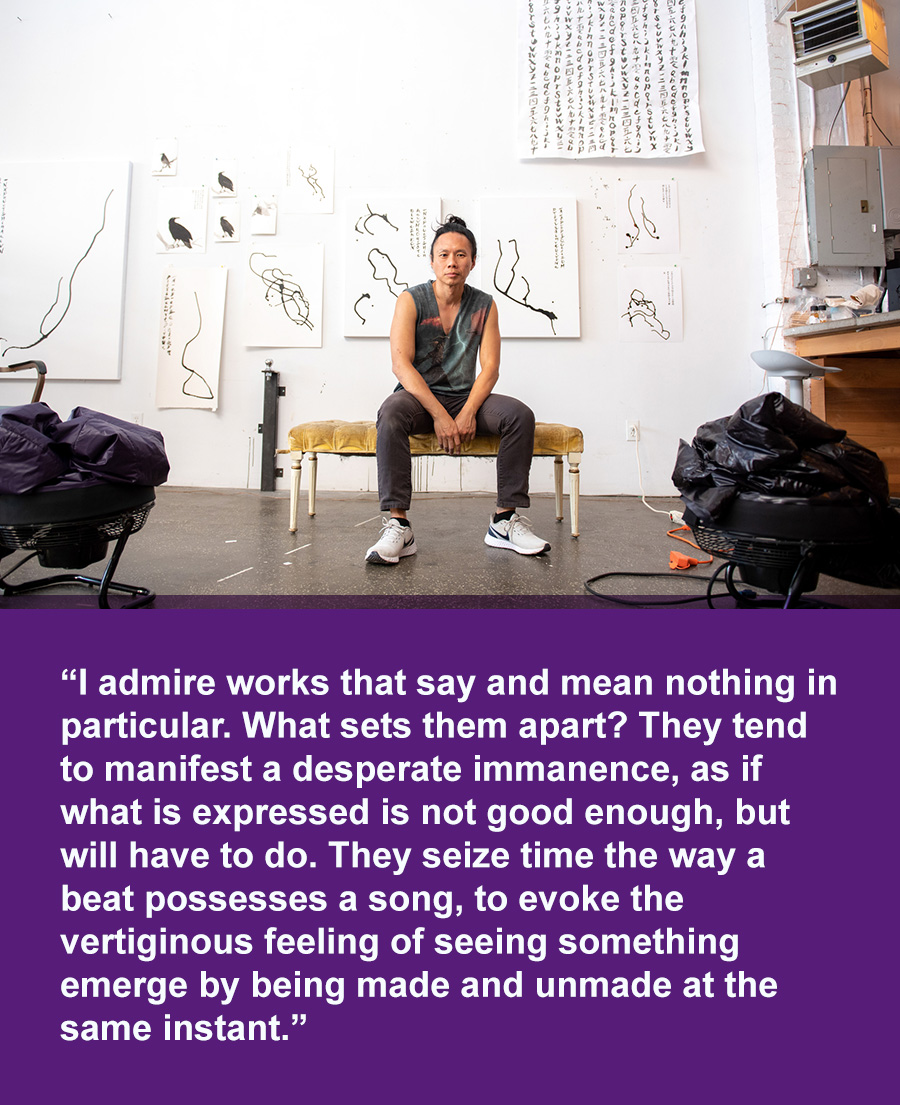 "I admire works that say and mean nothing in particular. What sets them apart? They tend to manifest a desperate immanence, as if what is expressed is not good enough, but will have to do. They seize time the way a beat possesses a song, to evoke the vertiginous feeling of seeing something emerge by being made and unmade at the same instant. They last as experiences by not staying whole as forms. They radiate an inner irreconcilability about what they are and what they want to be with unrestrained abandon, which is as close as it comes to an honest insight about the plight of living today. This radiance is what makes them pleasurable. Lively. But this is also why they rarely console, as art perhaps ought to, in these great times. They remain, in the end, comfortless. Why? They remind us of just how little time there is left—for anyone—of all that has been lost, how close it all is from disappearing, and what it takes to go on." 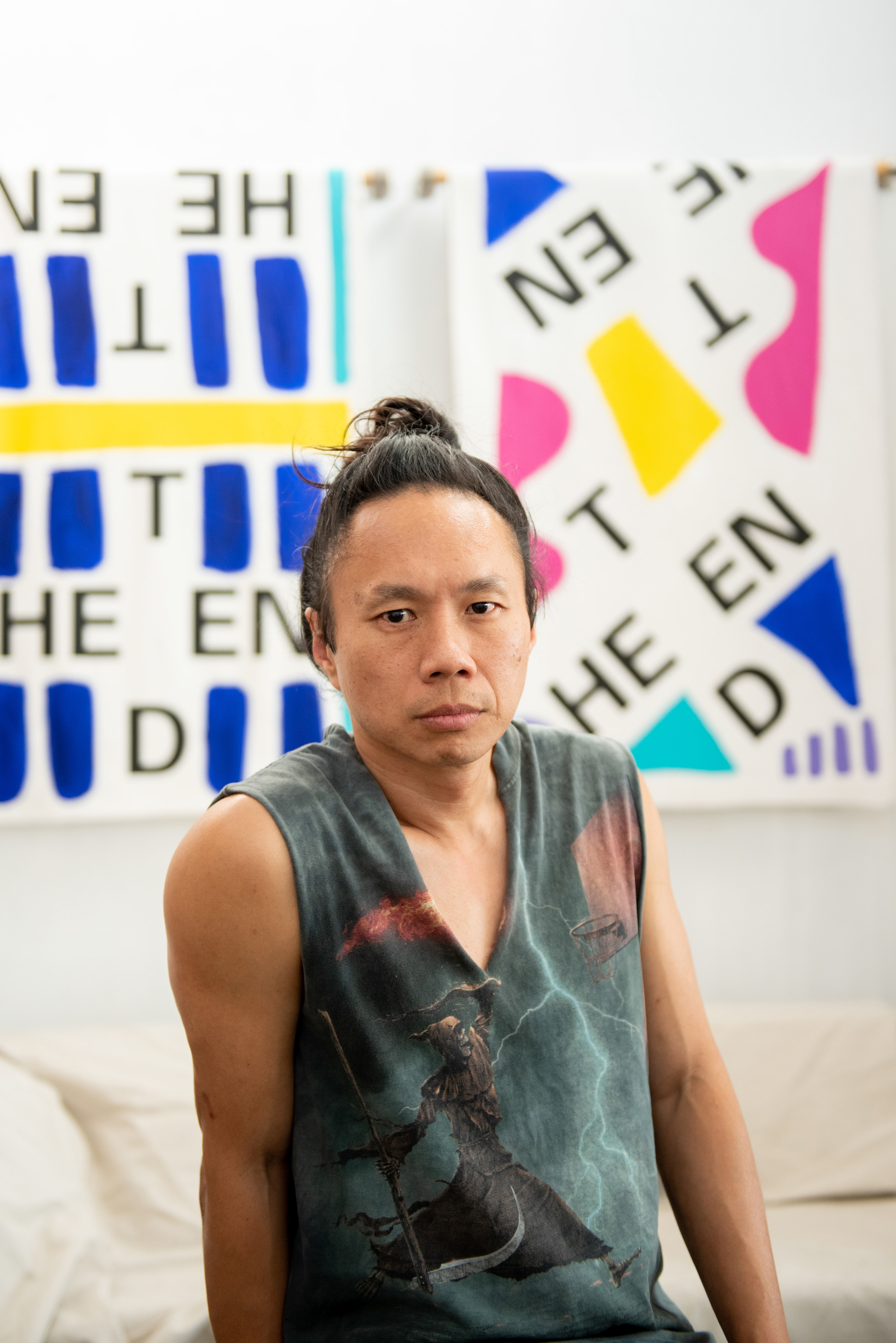 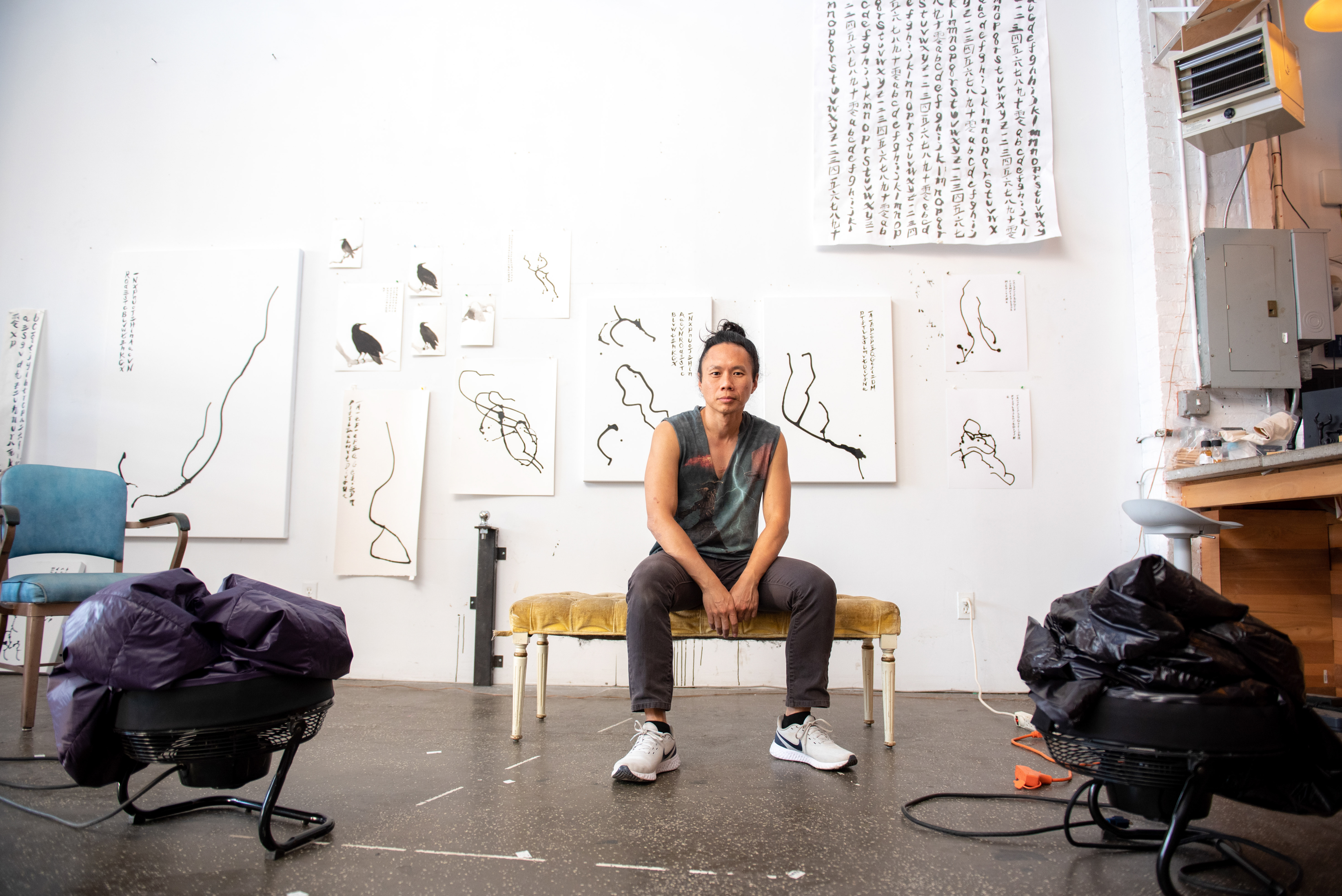 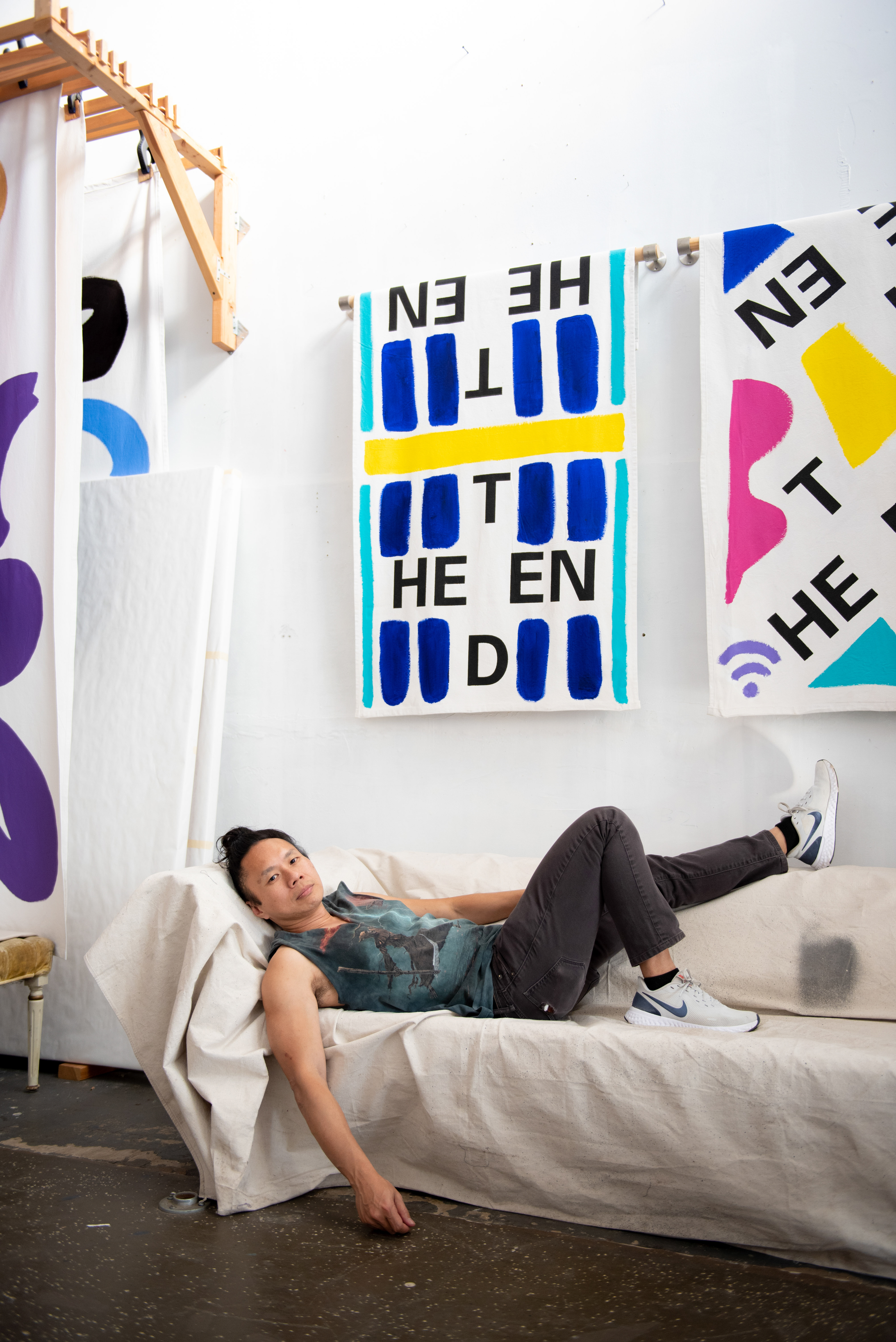 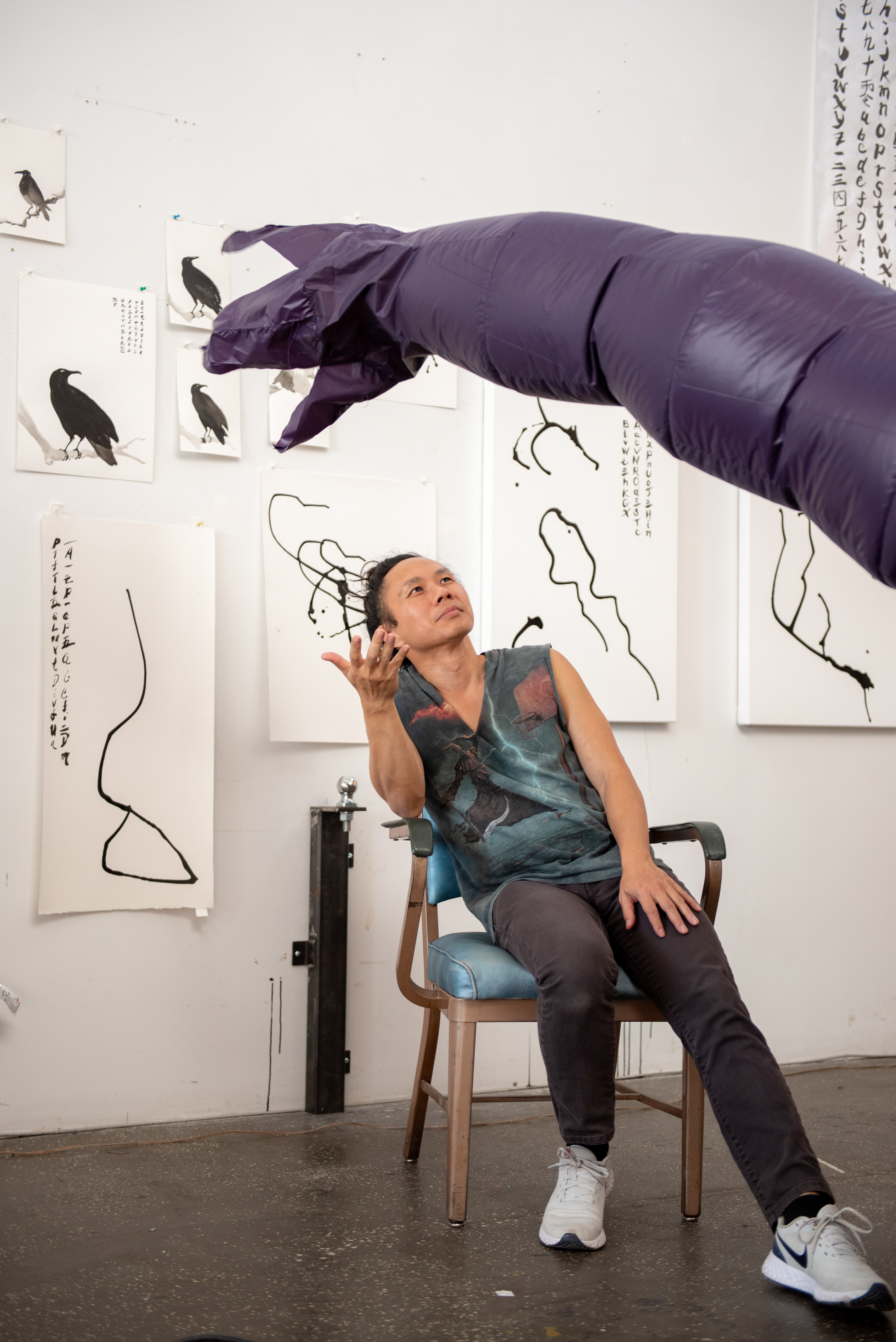 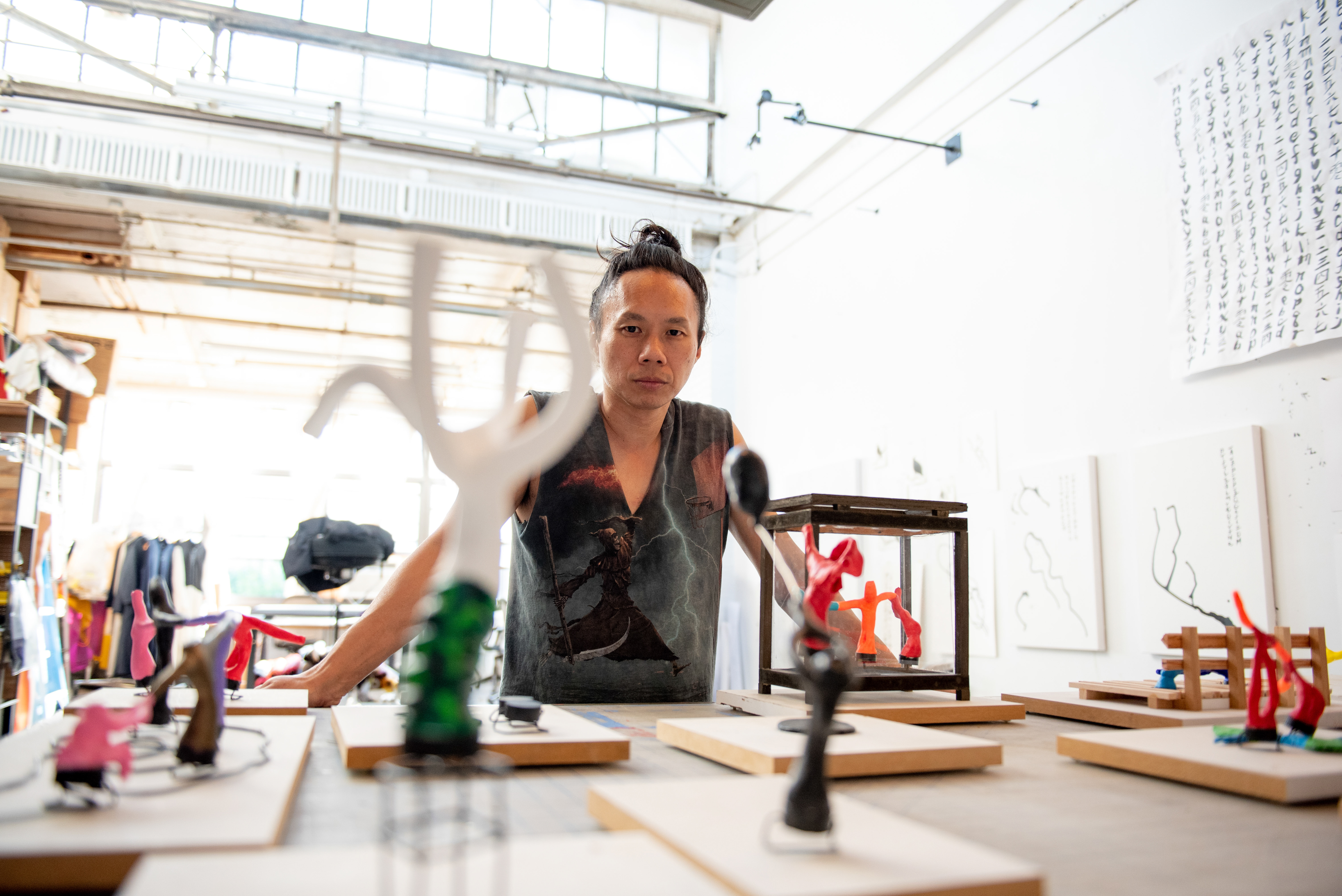 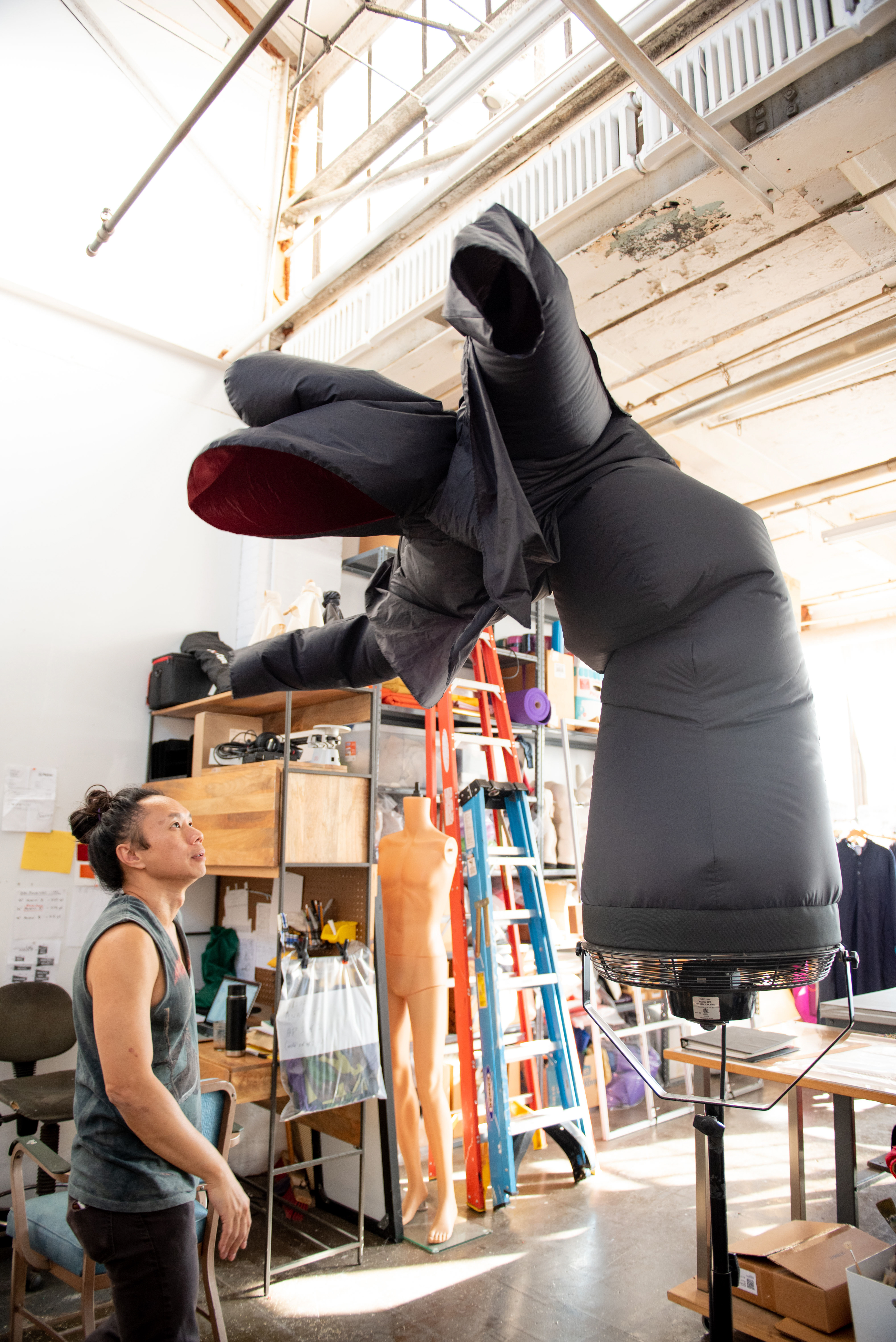