Musician, Scholar, and Artist/Activist | Class of 2022 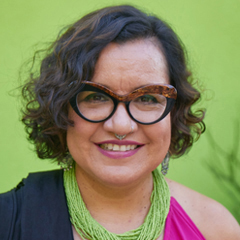 Martha Gonzalez is a musician, cultural theorist, and activist developing collaborative methods of artistic expression that build community and advance social justice principles. Gonzalez’s body of work spans musical performance, scholarship, and transnational arts education and organizing. A common thread uniting her many projects is the cultivation of convivencia within and across communities. Gonzalez defines convivencia as convenings that feature participatory art and music and dialogue around shared social values.

Gonzalez enacts her vision of convivencia in several collaborative music and dance-based projects. She is lead singer, songwriter, and percussionist in the East Los Angeles music collective Quetzal, which has brought the participatory principles of son jarocho and fandango to southern California. Son jarocho is a folk music style from Veracruz, Mexico, that is played during fandangos, or community celebrations featuring song and dance. In performances, she dances in the zapateado style upon a tarima—a hollow wooden platform that is both a stage and a percussive instrument. People of all ages and artistic abilities are invited to dance and sing, and the performances become a space to celebrate collective memories and build solidarity around social issues such as migration, identity, and inclusion. Gonzalez has expanded that ethos in projects that build reciprocal relationships across cultures and nations. She is a key participant in the annual community event FandangObon. This series of workshops and performances brings together son jarocho artists and Japanese American Buddhist dancers. In recent years, the event has included African American artists influenced by West African traditions of drumming and dancing. Gonzalez co-created Entre Mujeres, a cross‑border composition and recording project with women in Veracruz. Using inexpensive recording equipment in their homes, the women wrote and recorded music during free moments throughout their days. The songs often reflect their struggles to balance art-making and motherhood. Entre Mujeres grew out of Gonzalez’s work with Fandango Sin Fronteras (Fandango without Borders). Beginning as a dialogue between Los Angeles–based Chicano artists and counterparts in Veracruz, the work of Fandango Sin Fronteras has grown to include performances, recordings, publications, and community-building efforts. Gonzalez also develops arts curricula and teaches collective songwriting workshops in schools, jails, and community centers. Writing music together compels the participants to find common ground and disrupts divisions based on language, education, and gender.

Gonzalez applies a scholarly framework to her artistic practice in her book, [email protected] Artivistas: Music, Community, and Transborder Tactics in East Los Angeles (2020). Written in a testimonial format, Gonzalez recounts her evolution from a child singer and musician to a self-described artivista. She argues persuasively that collective musical experiences such as fandango can be sites of inquiry, dialogue, and action in service to social justice. With a deep understanding of the bidirectional flow of knowledge between art and activism, Gonzalez is empowering communities through musical forms of social engagement.

Martha Gonzalez received a BA (1999) from the University of California at Los Angeles and a PhD (2013) from the University of Washington at Seattle. She joined the faculty of Scripps College in 2013, and she is currently an associate professor in the Intercollegiate Department of Chicana/o Latina/o Studies and director of the Scripps Humanities Institute. From 2016 to 2019, she was the Gammage Resident Artist at Arizona State University, and for over 20 years Gonzalez has been an integral part of the socially conscious East Los Angeles musical ensemble Quetzal, along with her partner Quetzal Flores. Her recordings with Quetzal include Puentes Sonoros (2021), The Eternal Getdown (2017), and Imaginaries (2012). 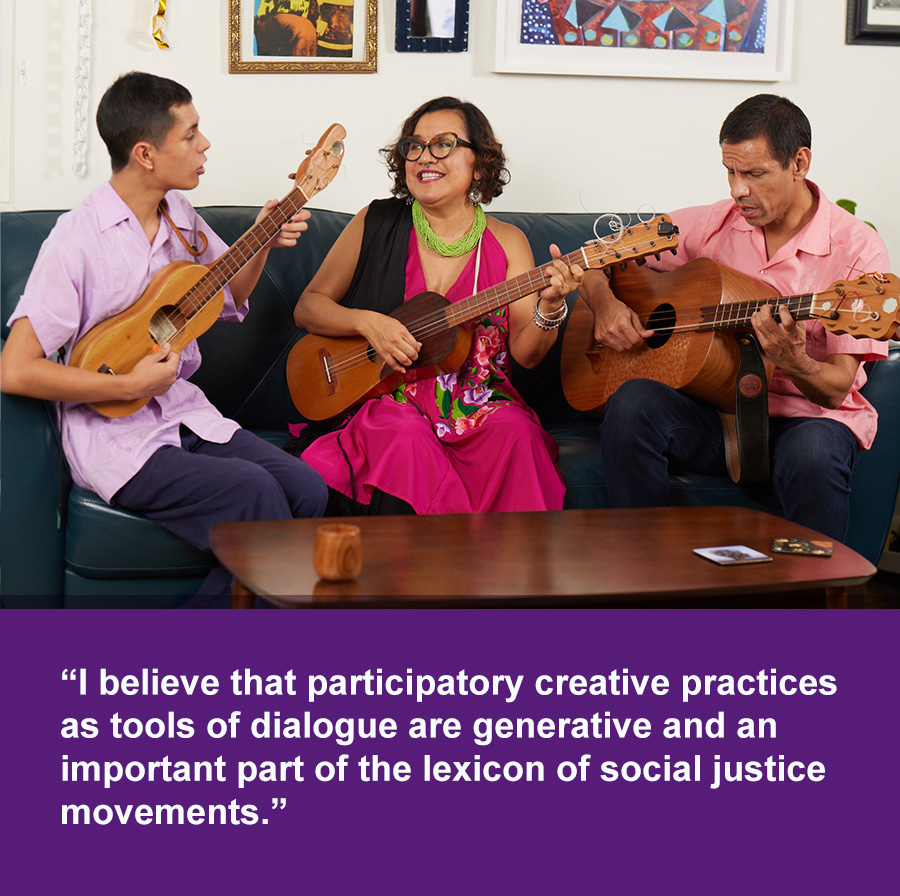 Martha Gonzalez plays music with her son Sandino Gonzalez-Flores (left) and her partner and founder of Quetzal, Quetzal Flores (right).

”Music and the power it invokes is at the heart of my practice as a Chicana musician, scholar, and activist. Creative processes such as fandango (Jarocho) and collective songwriting are empowering methodologies that have helped me and members of my communities summit into new forms of analysis and thus action. I believe that participatory creative practices as tools of dialogue are generative and an important part of the lexicon of social justice movements. ” 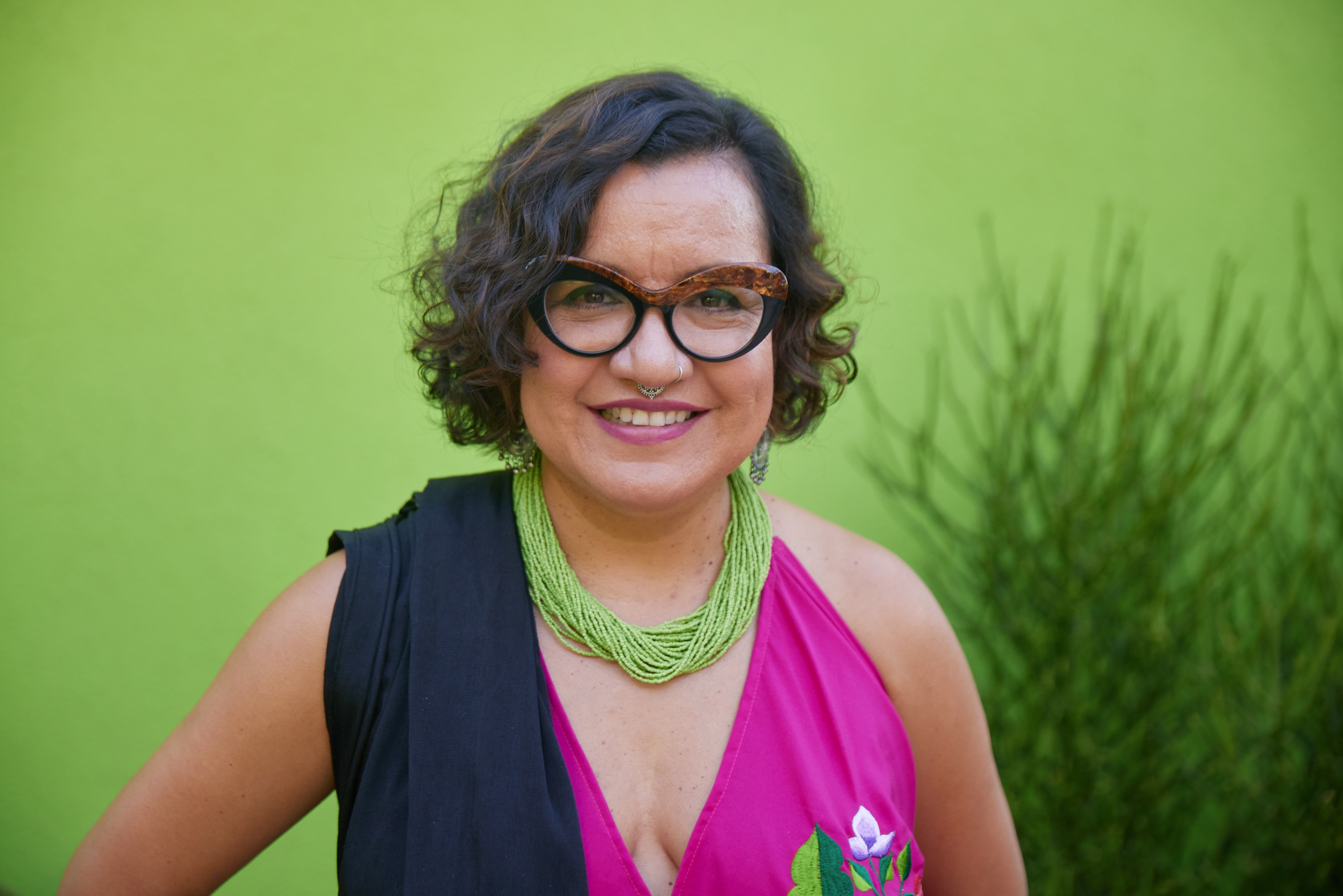 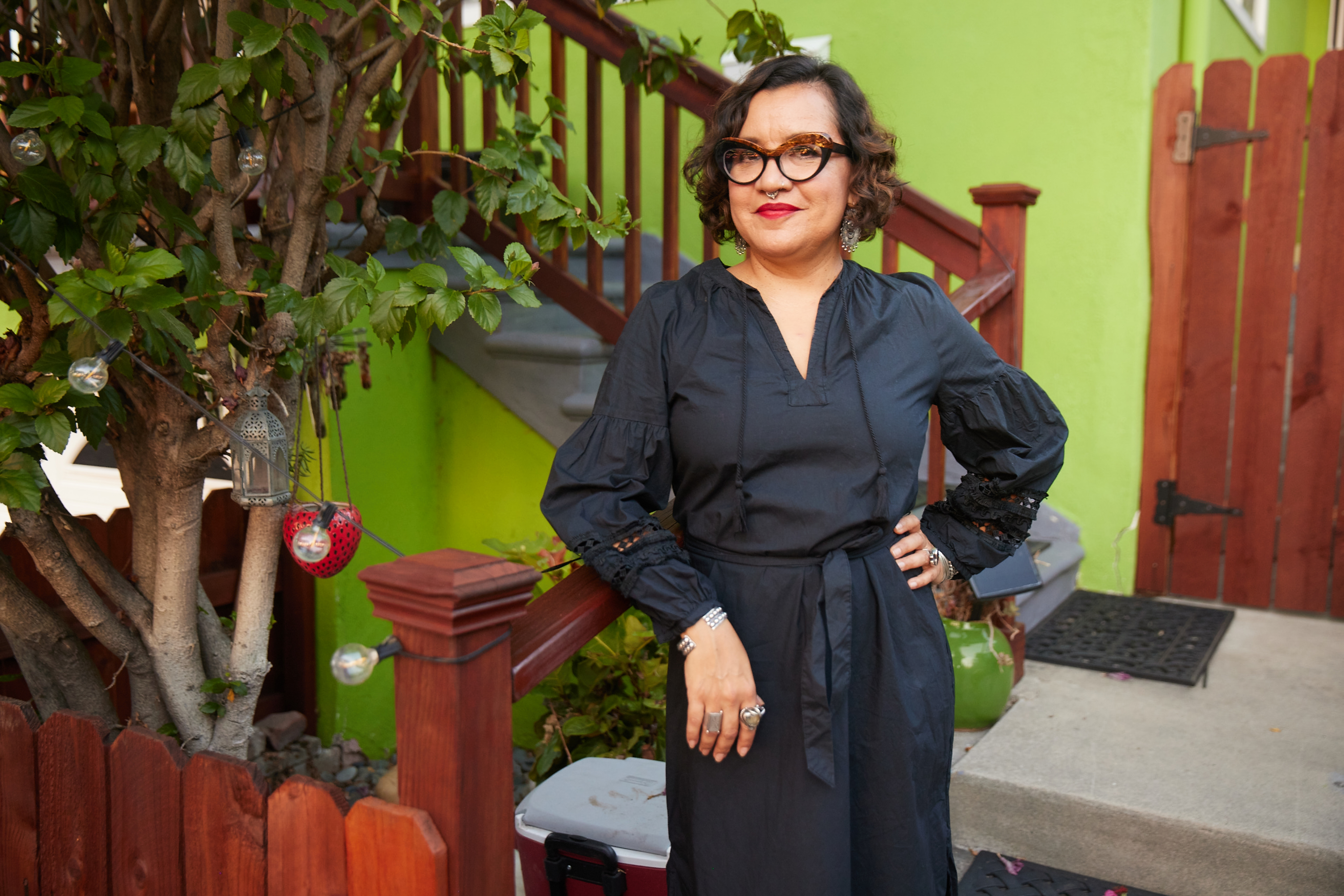 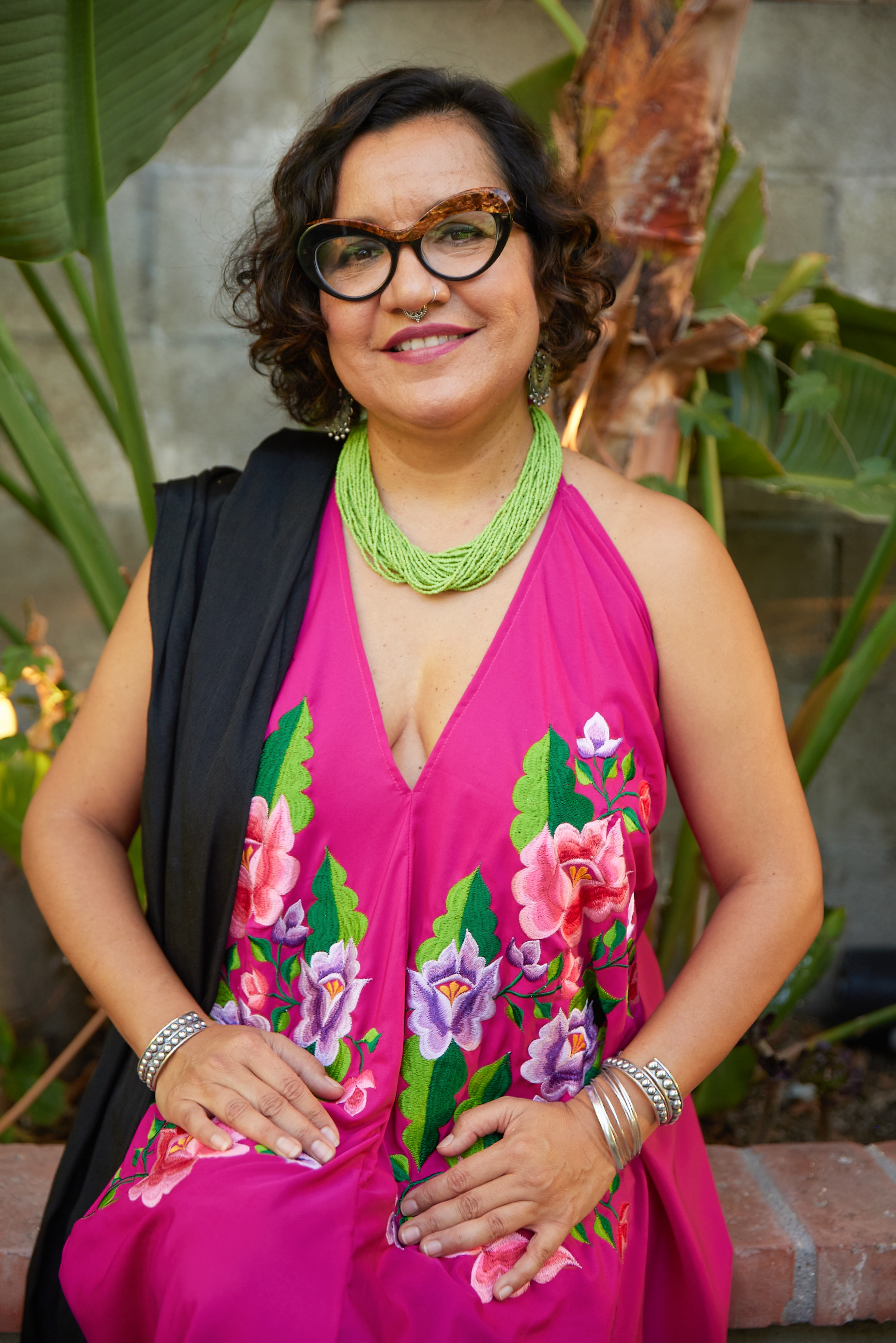 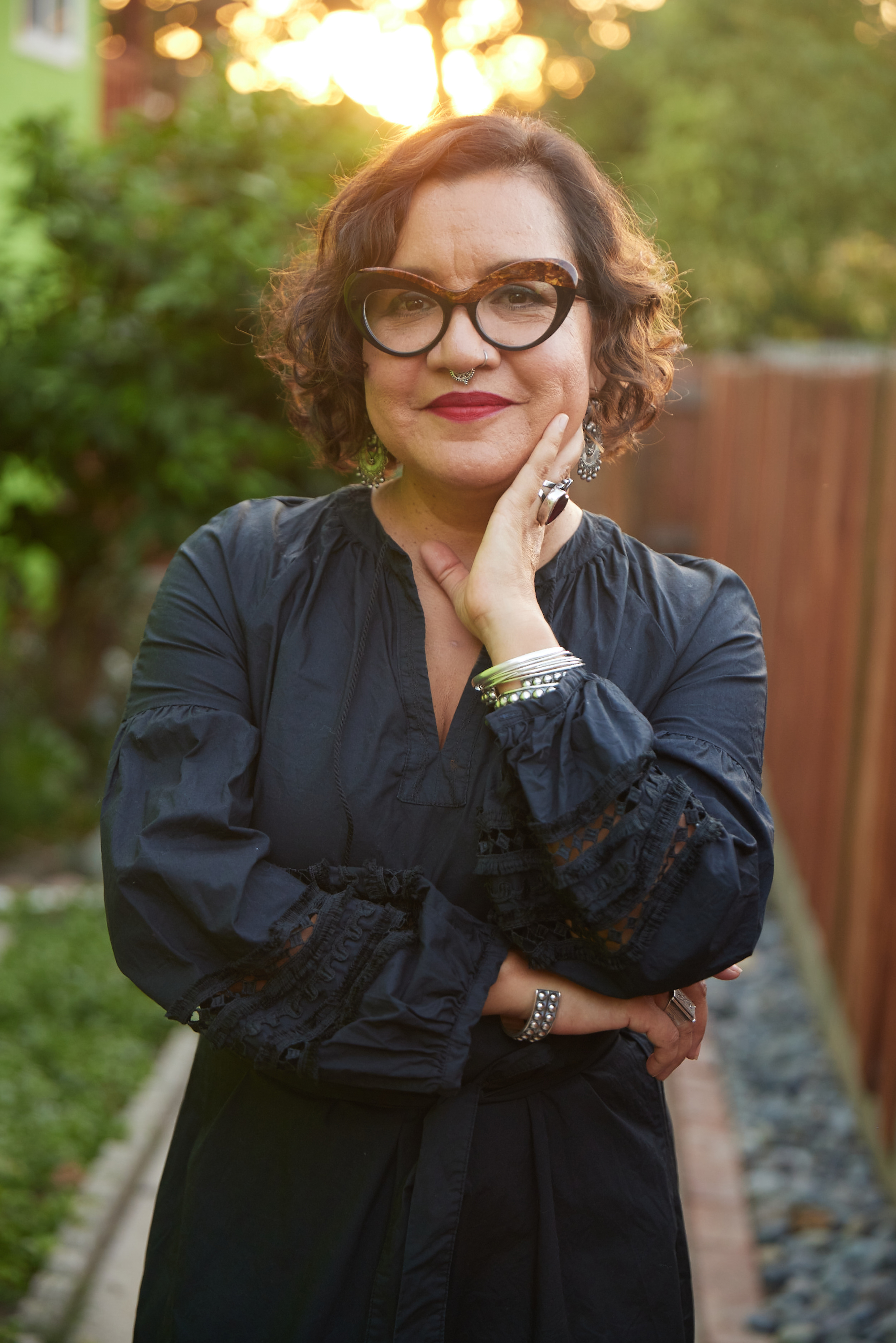 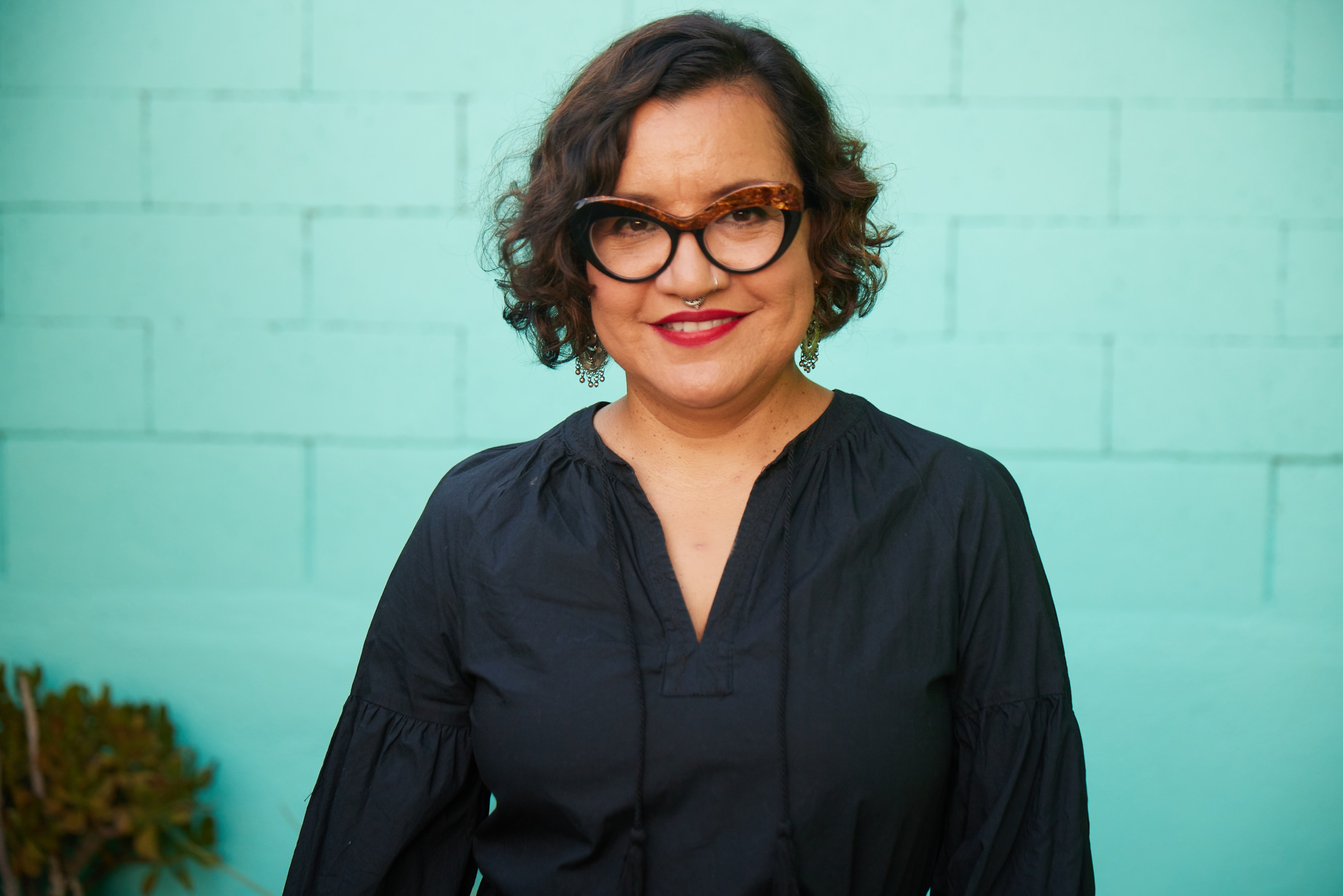 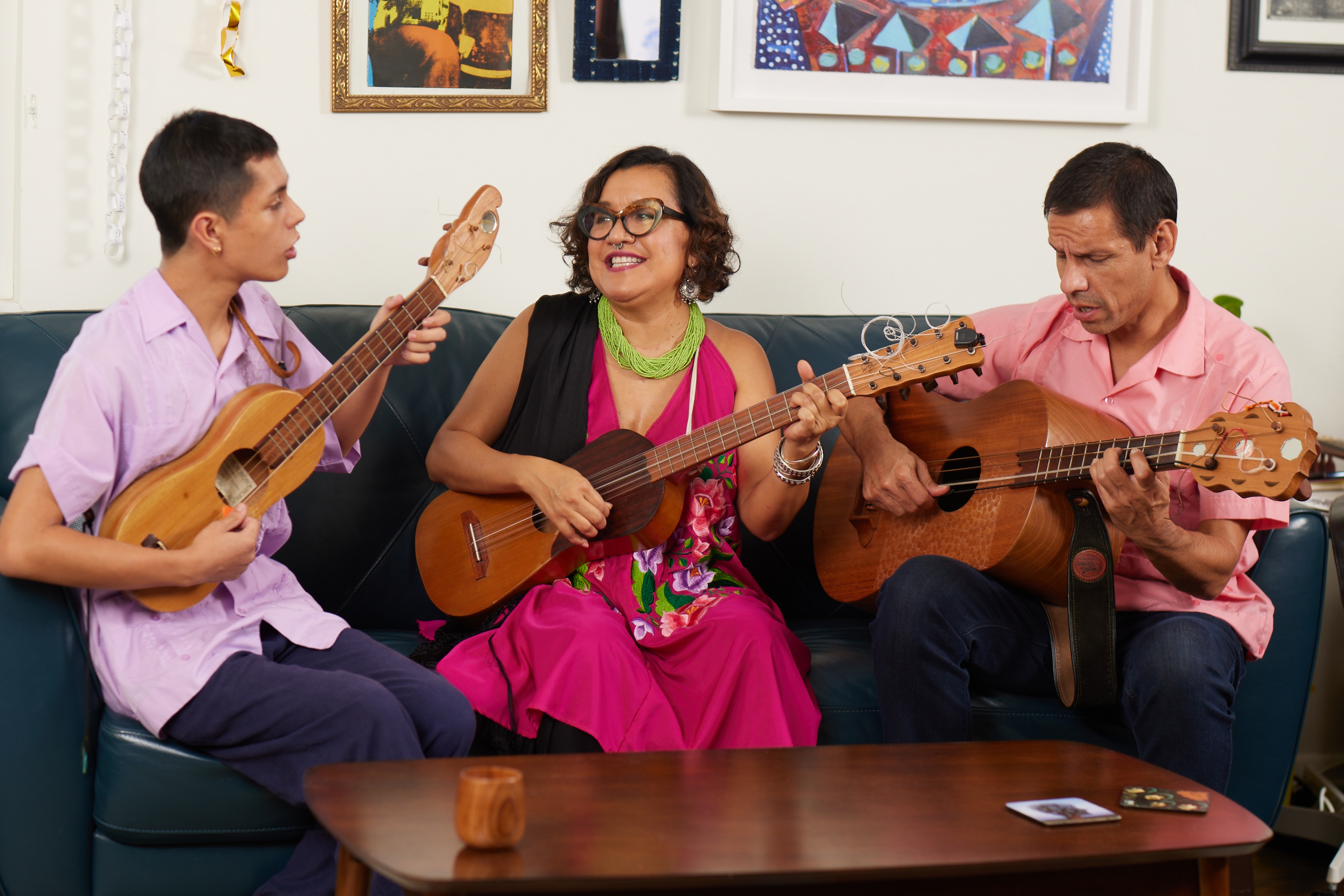