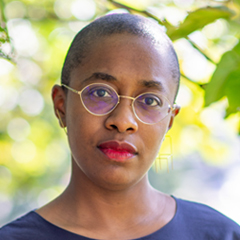 Cécile McLorin Salvant is a singer and composer bringing historical perspective, a renewed sense of drama, and an enlightened musical understanding to both jazz standards and her own original compositions. Classically trained and steeped in jazz, blues, folk, musical theater, cabaret, and vaudeville traditions, Salvant embraces a wide repertoire that broadens the possibilities of song as an art form.

Salvant’s nearly four-octave vocal range—from a bold, husky low register to clear high tones—animates her performances in a variety of configurations, from the spare duets for voice and piano featured on her album The Window (2018), to the instrumental trios on For One to Love (2015), to orchestral ensembles and her work with the all-female group Artemis. She locates her renditions of standards and new original compositions within a Black, feminist, global framework. In her fresh interpretations of lesser-known works, such as Josephine Baker’s “Si J’Étais Blanche” (If I Were White) and Bert Williams’s “Nobody,” Salvant demonstrates a deep psychological and emotional engagement with the lyrics, modulating her voice from sharp-edged wit to sorrow and heartbreak as she dissects the painful past in which these works were born. An as yet unrecorded piece, Ogresse (2018), is an ambitious long-form song cycle that showcases Salvant’s storytelling ability and theatricality. Salvant pairs her original lyrics for a cast of characters—all of which she sings—with an orchestral score that blends baroque elements with bluegrass and jazz. Based on oral fairy tales from the nineteenth century, the work centers around a female protagonist who falls in love but ultimately devours her lover, a narrative that explores the nature of power, freedom, and desire in a racialized, patriarchal world.

Through her wide-ranging choices in musical material and her manifold powers of expression, Salvant is reaffirming the timelessness of jazz as an art form and demonstrating its continuing cultural relevance in a fast-changing world.

Cécile McLorin Salvant studied at the Université Pierre Mendès-France. Her additional albums include Cécile (2010), WomanChild (2014), and Dreams and Daggers (2017). She has performed at such national and international venues and festivals as the Newport Jazz Festival, the Monterey Jazz Festival, the Village Vanguard, and the Kennedy Center. Salvant is also a visual artist.