Designing adaptive and resilient urban habitats and encouraging residents to be active stewards of the ecological systems underlying our built environment. 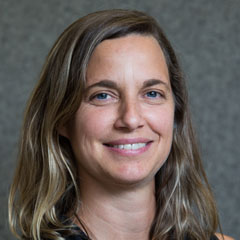 Kate Orff is a landscape architect envisioning new forms of public space that reveal and revive the hidden ecological systems underlying our built environments and encourage urban residents to become active stewards of their natural surroundings. Her research and design practice addresses the challenges posed by urbanization and climate change (such as biodiversity loss and rising sea levels) through in-depth collaborations with ecologists, engineers, educators, artists, and community members that aim to make our urban habitats more adaptive and resilient.

As founding principal of SCAPE, a landscape architecture and urban design studio, Orff's work ranges from large-scale coastal infrastructure initiatives to the design of city parks, as well as book-length publications, museum exhibitions, and self-guided podcast tours that invite city dwellers to explore the natural histories of their regions. She partnered with photographer Richard Misrach to produce Petrochemical America (2012), a two-part book that documents and visualizes the interrelated economic, environmental, and public health issues facing an area of intense chemical production along the Mississippi River, stretching from Baton Rouge to New Orleans. For the Rebuild by Design competition launched by the Department of Housing and Urban Development in the wake of Superstorm Sandy, Orff and an interdisciplinary team of collaborators proposed a risk reduction and ecological revitalization concept for Staten Island's southern shore called Living Breakwaters. In contrast to hard infrastructure, such as flood walls, that simply displace rising water to nearby vulnerable areas, the project employs a necklace of breakwaters designed to support the growth of oyster reefs and other marine habitats and to defend against wave damage and coastal erosion. Integrated into the concept are on-shore marine education and recreation centers that will connect students and neighboring communities to the shallow water landscapes and oyster reef restoration efforts protected by the breakwaters. Construction of Living Breakwaters is scheduled to begin in late 2018. SCAPE's design for Town Branch Commons in Lexington, Kentucky, celebrates the region's porous limestone geology. The project will open up Town Branch creek, which currently flows through culverts buried beneath downtown Lexington, at strategic points along its length to create a 2.5­­-mile network of trails, parks, pools, stream channels, and storm water management systems in the heart of the city.

Orff's resourceful design approach calls attention to the most distinctive natural attributes of a given place, while her collaborations and community outreach strategies extend the boundaries of traditional landscape architecture.

Kate Orff received a B.A. (1993) from the University of Virginia and an M.L.A. (1997) from Harvard University. She is the author of Toward an Urban Ecology (2016) and co-editor of Gateway: Visions for an Urban National Park (2011). She is the founder of SCAPE and is an associate professor and director of the Urban Design Program in the Graduate School of Architecture, Planning, and Preservation at Columbia University. SCAPE has exhibited work at the Museum of Modern Art and will be an exhibitor at the 2018 Venice Architecture Biennale U.S Pavilion.