Making arresting, playful, and erudite videos that explore the condition of women throughout history. 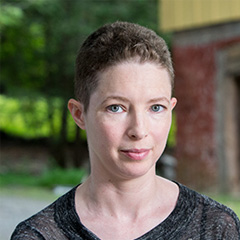 Mary Reid Kelley is an artist who makes arresting, playful, and erudite videos that explore the condition of women throughout history. Drawing on literary and historical material, the videos involve intensive research and critical reassessments of standard historical narratives. Reid Kelley is involved in every aspect of the videos’ creation—from writing the scripts (typically in highly structured poetic verse), to designing the sets, props, and costumes, to performing the leading roles—and all of the videos are produced by her and her partner, Patrick Kelley, at their private studio.

The style of the works—which is informed by the crude, black and white figures of early animation and the lo-tech look of amateur film—lends visual force to her sardonic, critical view of the pacifying notion that progress has completed its work improving the standing of women in society. In You Make Me Iliad (2010), Reid Kelley plays the respective roles of a Belgian prostitute working near the frontlines during World War I and a male soldier with medical training who is charged with monitoring the brothels. In over one hundred rhymed couplets, densely packed with puns, literary allusions, double entendre, and other varieties of language play, Reid Kelley mockingly discloses the unbalanced power dynamics and confined gender roles of the sexual economies of World War I.

A recent trilogy of films centers around the Greek myth of the minotaur, reimagined as half-woman, half-bull in the inaugural video, Priapus Agonistes (2013). The second of the series, Swinburne’s Pasiphae (2014), takes for its script an unpublished fragment by the Victorian poet Charles Algernon Swinburne. Reid Kelley luridly portrays Pasiphae’s aberrant lust for a white bull, which results in the conception of the minotaur. The juxtaposition of contemporary cultural references with classical and Victorian precedents uncannily reveals the stubborn endurance of sexual taboos and gender inequity across history. Reid Kelley is fusing together a variety of artistic approaches and traditions—from drawing and painting, sculpture and installation, to theater and cinema, performance and literary criticism—into a hybrid form of video that is like nothing else being produced today.

Mary Reid Kelley received a B.A. (2001) from Saint Olaf College and an M.F.A. (2009) from Yale University. Her videos and installations have been screened, exhibited, and performed at numerous national and international venues, including the Hammer Museum, the Institute for Contemporary Art, Boston, the Tate Modern, and the Wexner Center for the Arts. She is a senior critic at the University of Pennsylvania School of Design and a critic in painting at the Yale University School of Art.