Cartoonist and Graphic Memoirist | Class of 2014

Expanding the expressive potential of the graphic form in intricate narratives that explore the complexities of familial relationships. 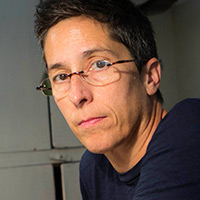 Alison Bechdel is a cartoonist and graphic memoirist exploring the complexities of familial relationships in multilayered works that use the interplay of word and image to weave sophisticated narratives. Bechdel’s command of sequential narrative and her aesthetic as a visual artist was established in her long-running comic strip, Dykes to Watch Out For (1983–2008), which realistically captured the lives of women in the lesbian community as they influenced and were influenced by the important cultural and political events of the day.

Garnering a devoted and diverse following, this pioneering work was a precursor to her book-length graphic memoirs. Fun Home: A Family Tragicomic (2006) is a nuanced depiction of a childhood spent in an artistic family in a small Pennsylvania town and of her relationship with her father, a high school English teacher and funeral home director. An impeccable observer and record keeper, Bechdel incorporates drawings of archival materials, such as diaries, letters, photographs, and news clippings, as well as a variety of literary references in deep reflections into her own past.

Bechdel composes an intricate, recursive narrative structure that is compelling on both the visual and verbal planes in Are You My Mother? A Comic Drama (2012), a meditation on her relationship with her emotionally distant mother seen through the lens of psychoanalytic theory. As in Fun Home, the images in Are You My Mother? do not always correspond to or illustrate the words; rather, they mutually interpret or often tug against each other, creating a space between them that invites a multiplicity of interpretations. With storytelling that is striking for its conceptual depth and complexity in structure as well as for the deft use of allusion and reference, Bechdel is changing our notions of the contemporary memoir and expanding the expressive potential of the graphic form.

Alison Bechdel received a B.A. (1981) from Oberlin College. She is the editor of Best American Comics (2011), and her comic strip work has been collected in numerous volumes, most recently The Essential Dykes to Watch Out For (2008). Her work has also appeared in such publications as Slate, the New York Times Book Review, McSweeney’s, Granta, and The New Yorker.