Using raw, vernacular dialogue and spare, unsentimental prose to draw readers into the various and distinct worlds that immigrants must straddle. 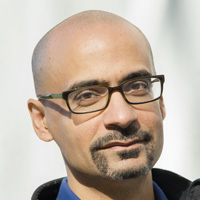 Junot Díaz is a writer whose finely crafted works of fiction offer powerful insight into the realities of the Caribbean diaspora, American assimilation, and lives lived between cultures. Born in the Dominican Republic and living in the United States since adolescence, Díaz writes from the vantage point of his own experience, eloquently unmasking the many challenges of the immigrant’s life. With skillful use of raw, vernacular dialogue and spare, unsentimental prose, he creates nuanced and engaging characters struggling to succeed and often invisible in plain sight to the American mainstream. In Drown (1996), an anthology of interrelated short stories, Díaz describes his narrator’s coming-of-age in New Jersey and the Dominican Republic, deftly interweaving complex chronologies, particulars of place, and shifting narrative perspectives. The Brief Wondrous Life of Oscar Wao (2007), Diaz’s first novel, follows three generations of a family living in both the Dominican Republic and the United States. Through the striking voice of the narrator—a mix of Spanish, English, and street slang with myriad literary and popular culture references—Díaz approaches the complicated and troubled history of the Dominican Republic with humor and irony while also tracing the legacy of the violent Trujillo regime, both for those who lived through it and those who left. In these book-length works and numerous other short stories and essays, Díaz composes vivid narratives that capture the texture of day-to-day survival and draw readers into the various and distinct worlds that immigrants must straddle.

Junot Díaz received a B.A. (1992) from Rutgers University and an M.F.A. (1995) from Cornell University. He was affiliated with Syracuse University (1997–2002) prior to joining the School of Humanities, Arts, and Social Sciences at the Massachusetts Institute of Technology, where he is currently the Rudge and Nancy Allen Professor of Writing. His additional publications include the story collection This Is How You Lose Her (2012) and short stories in The New Yorker, the Paris Review, and Callaloo, among others.