Satirizing and humanizing the moral dilemmas faced by Americans in the twenty-first century. 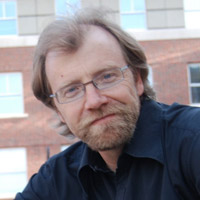 George Saunders is a short story writer whose mordantly hilarious tales retain, at their core, deep sympathy and compassion for the lives he depicts. Characterized by a blend of contrasting elements, much of Saunders’ fantastic and fanciful writings combine satire and surrealism with a naturalistic, colloquial use of language. With a keen eye for absurdity, a precise ear for vernacular dialogue, and a distinctively deadpan narrative voice, Saunders explores the poignant disappointments of his downtrodden characters and the slightly skewed, vaguely futuristic version of American society they inhabit. While his stories are humorous, the moral dilemmas faced by his fictional mothers, husbands, siblings, and neighbors underscore their humanity and lend gravity to his work. Exemplifying this approach, the title story of Saunders’ collection Pastoralia (2000) satirizes in a manner both comic and sobering the indignities of the workplace through its portrayal of two theme park employees’ daily struggles. Other books by Saunders include the story collections, CivilWarLand in Bad Decline (1996) and In Persuasion Nation (2006); a children’s book, The Very Persistent Gappers of Frip (2000); and a novella, The Brief and Frightening Reign of Phil (2005). This sharply observant, highly imaginative author continues to influence a generation of young writers and brings to contemporary American fiction a sense of humor, pathos, and literary style all his own.

George Saunders received a B.Sc. (1981) from the Colorado School of Mines and an M.A. (1988) from Syracuse University. He worked as a technical writer and geophysical engineer at Radian International in Rochester, New York (1989-1996), prior to joining the faculty of Syracuse University, where he is currently a professor of creative writing. His fiction has appeared in such publications as the New Yorker, Harper's, and Esquire, among many others.