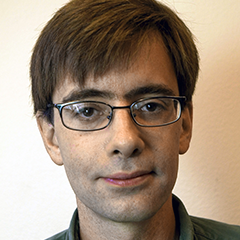 Michael Dickinson is a biologist whose research is unraveling the mysteries of insect flight. Dickinson’s investigations integrate a wide variety of scientific disciplines – muscle physiology, comparative anatomy, aerodynamics, biomechanics, neuroscience, and behavior – in an effort to produce a comprehensive understanding of this complex animal activity. He developed a robotic-fly model in which each of the parameters of wing movement could be carefully controlled and their effects on aerodynamics assessed. To understand how the fly’s brain controls these aerodynamic properties, Dickinson constructed a "virtual reality" arena where tethered flies can be subjected to a variety of visual and rotational stimuli in order to measure the compensatory neural responses.