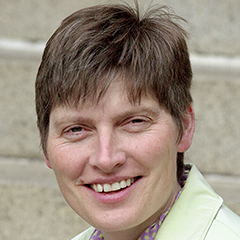 Lene Hau is an optical physicist whose research expands our capacity to control light. Hau has shown how it is possible, under precise experimental control, to extend the time it takes for photons to pass through certain materials. She stimulates small clouds of ultracold gas (Bose-Einstein condensates) with finely tuned lasers, so that light passing through them perpendicular to the laser beam, slows to a crawl. Using a technique she codeveloped (electromagnetically-induced transparency), Hau has been able to stop light completely and then release it under experimental control. Her experiments provide a proof-of-concept for the development of optical switches that preserve the quantum state of photons passing through them. Such switches may become an invaluable component of future computers that use quantum physics to perform calculations.

Lene Hau received a B.S. (1984) and an M.S. (1986) and a Ph.D. (1991) from the University of Aarhus, Denmark. She has trained at CERN (Geneva), the Department of Physics at Harvard University, and the Rowland Institute for Science. Hau is the Gordon McKay Professor of Applied Physics and a professor of physics at Harvard University. She was previously on the scientific staff of the Rowland Institute. She has published numerous articles in such journals as Nature and Science.