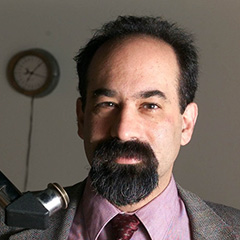 David Spergel is a theoretical astrophysicist whose research describes the origins, structure, and future evolution of the universe. His research tackles the most challenging questions in astrophysics, ranging from the interpretation of solar neutrino flux, to the role of dark matter in the creation of the Milky Way, to the early history of galactic formations and gravitational deformations, to the very shape of the universe. Spergel is the principal theorist for NASA’s Microwave Anisotropy Probe (MAP), a project that seeks to generate a high-resolution map of the tiny fluctuations in the cosmic microwave background radiation – remnants of the first appearance of light after the Big Bang. In addition, his novel hypothesis regarding the presence of a large cloud of hydrogen gas near our galaxy opens an avenue towards a clearer explanation for the formation of the local group that includes the Milky Way.

David Spergel is currently Charles Young Professor of Astronomy and chair of the Department of Astrophysical Sciences at Princeton University. He played a leading role in the analysis and interpretation of microwave background data from the WMAP (Wilkinson Microwave Anisotropy Probe) satellite and the Atacama Cosmology Telescope. His analysis help to establish the standard model of cosmology: a flat universe filled with dark matter and dark energy and with density fluctuations generated in the first moments of the big bang. He and his collaborators have measured the shape and age of the universe and determined its basic properties. He currently leads the science team for NASA’s WFIRST (Wide-Field Infrared Survey Telescope) mission, a proposed mission that aims to characterize the properties of dark energy and the atmospheres of extrasolar planets.