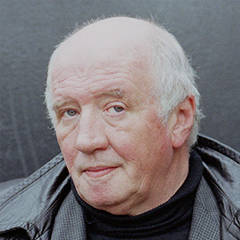 Dave Hickey is an art critic and analyst of Western culture who offers entirely original perspectives on contemporary art in essays that engage academic and general audiences equally. Writing with grace and humor on a broad range of figures, Hickey invites his readers to experience art on its own terms. He conveys his interpretations and encyclopedic knowledge of art history through commonly shared experiences and metaphors, yet the accessibility of his writing in no way diminishes his intellectual influence; scholars have formally debated the merits of his sometimes quite contrarian arguments. Hickey’s critical essays on art have been collected in two volumes, The Invisible Dragon: Four Essays on Beauty (1993) and Air Guitar: Essays in Art and Democracy (1997), and he has published a collection of short stories, Stardumb (1999), with drawings by the artist John DeFazio. He is also the author of museum exhibition catalog essays on a variety of artists’ work and has written articles for such publications as Daedalus and Harper’s.

Dave Hickey received a B.A. (1961) from Texas Christian University and an M.A. (1963) from the University of Texas, Austin. He is the Schaeffer Professor of Modern Letters at the University of Nevada, Las Vegas, and Distinguished Visiting Professor at the Otis College of Art and Design in Los Angeles.