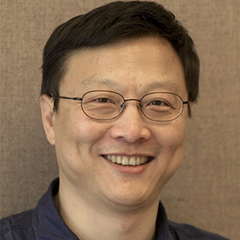 Bright Sheng is an innovative composer whose skillful orchestrations bridge East and West, lyrical and dissonant styles, and historical and contemporary themes to create compositions that resonate with audiences around the world. A frequent motif in his compositions is the development of Asian themes and drama within Western musical forms. In The Song of Majnun (1992), an opera in one act, Sheng revisits an Asian tale of star-crossed lovers, while in Flute Moon (1999) he reworks a classic art song from the thirteenth century that depicts characters from Chinese legend. Madame Mao (2003) presents a psychological portrait of Jiang Qing, Chairman Mao’s wife, in a two-act opera. These and many other orchestral compositions have earned him acclaim as a fresh voice in cross-cultural music and numerous commissions. Also a conductor and an accomplished pianist, Sheng serves as an advisor to the Silk Road Project, an international program that identifies, archives, and interprets musical traditions of the Far Eastern trade routes.

Bright Sheng received a B.A. (1982) from the Shanghai Conservatory of Music, an M.A. (1984) from Queens College, CUNY, and a Ph.D. (1993) from Columbia University. He is the Leonard Bernstein Distinguished University Professor of Music at the University of Michigan, where he joined the faculty in 1995.