Puppetry Artist and Director | Class of 2015

Revitalizing puppetry as a serious and sophisticated art form in imaginative experiments with its materials, techniques, and uses in both narrative and abstract works. 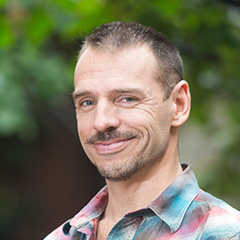 Basil Twist is a puppeteer and theater artist whose experiments with the materials and techniques of puppetry explore the boundaries between the animate and inanimate, the abstract and the figurative. Twist’s works range from productions of classic stories to abstract visualizations of orchestral music and are informed by puppetry traditions from around the world, including hand puppets, bunraku, and string-and-rod marionettes.

His best-known work, Symphonie Fantastique (1998), uses a complex choreography of fabric, feathers, tinsel, and cutouts in a 500-gallon tank of water to evoke human characteristics and emotions and illuminate Berlioz’s score in unexpected ways. Twist has brought puppetry to new audiences and venues with a captivating beauty and refinement. He tells the story of La Bella Dormente nel Bosco (Sleeping Beauty in the Woods, 2005) with life-sized marionettes, controlled by puppeteers on an overhead bridge, and onstage singers. In Petrushka (2001), he employs meticulously crafted, life-like puppets moved by puppeteers who are sometimes visible (as in the bunraku tradition) to underscore the theme of tragic manipulation in the love-triangle plot. More recently, Twist has returned to his roots in abstraction in The Rite of Spring (2013); he enacts the intensity of both Stravinsky’s score and the response to the original ballet’s debut in 1913 through cascading curtains of billowing silk, crumpled paper, curling smoke, projections, and just a single dancer.

In addition to his own productions, Twist is a frequent collaborator with renowned opera companies, choreographers, and playwrights, and he has trained and mentored an entire generation of young puppet artists at the Dream Music Puppetry Program based at the HERE Arts Center. Twist’s wide-ranging and trailblazing body of work is revitalizing puppetry as a serious and sophisticated art form in and of itself and establishing it as an integral element in contemporary theater, dance, and music.

Basil Twist received a D.M.A. (1993) from the École Nationale Supérieure des Arts de la Marionnette. His additional works include Master Peter’s Puppet Show (2002), Hansel and Gretel (2006), Dogugaeshi (2004), and Arias with a Twist (2008). He has designed and directed puppets for a number of collaborative theatrical and opera productions, such as Red Beads (Mabou Mines, 2005) and The Long Christmas Ride Home (written by Paula Vogel, 2004), and original dance works, including Darkness and Light (Pilobolus, 2008) and Cinderella (Dutch National Ballet, 2012). Since 1999, he has served as director of the Dream Music Puppetry Program at the HERE Arts Center in New York City.