Interpreting complex and challenging issues around race and racism through the lens of personal experience and nuanced historical analysis. 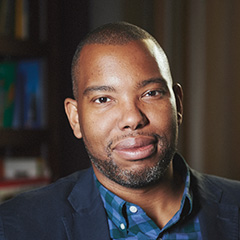 Ta-Nehisi Coates is a journalist, blogger, and memoirist who brings personal reflection and historical scholarship to bear on America’s most contested issues. Writing without shallow polemic and in a measured style, Coates addresses complex and challenging issues such as racial identity, systemic racial bias, and urban policing. He subtly embeds the present—in the form of anecdotes about himself or others—into historical analysis in order to illustrate how the implications of the past are still experienced by people today.

In a series of blog posts about the Civil War and a long-form print essay on “The Case for Reparations” (2014), Coates grapples with the rationalizations for slavery and their persistence in twentieth-century policies like Jim Crow and redlining—the practice of denying loans and other financial services to African Americans. In “Reparations” Coates compellingly argues for remuneration for the economic impact on African Americans denied the ability to accumulate wealth or social status for generations. At once deeply felt and intensely researched, the essay prompted a national conversation.

Coates opens a window to the formation of his worldview in his memoir, The Beautiful Struggle (2008), a reflection on race, class, and masculinity told through the lens of growing up in Baltimore as the son of a former Black Panther. Coates describes the evolution of his views on constructions of race in Between the World and Me (2015). In this passionate and lyrical book-length essay addressed to his teenage son, he unflinchingly articulates the physical and mental experience of being a black man in America today. A highly distinctive voice, Coates is emerging as a leading interpreter of American concerns to a new generation of media-savvy audiences and having a profound impact on the discussion of race and racism in this country.

Ta-Nehisi Coates attended Howard University. His articles have appeared in local and national publications, including the Village Voice, the Washington City Paper, the Washington Post, the New York Times Magazine, Time Magazine, The New Yorker, and The Atlantic, where he is currently a national correspondent. He was a Martin Luther King Jr. Visiting Scholar at the Massachusetts Institute of Technology in 2012 and a journalist-in-residence at the City University of New York Graduate School of Journalism in 2014.