Creating a new model for higher education in Africa that combines training in ethical leadership, a liberal arts tradition, and skills for contemporary African needs and opportunities. 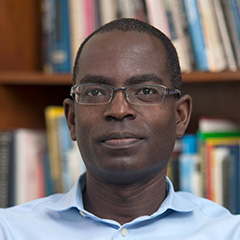 Patrick Awuah is an educator and entrepreneur building a new model for higher education in Ghana. Ashesi University, which Awuah founded in 2002, is a four-year private institution that offers a core curriculum grounded in liberal arts, ethical principles, and skills for contemporary African needs and opportunities. Awuah, a native of Ghana, was educated at American universities and began a successful career as a Microsoft engineer, but a vision for better higher education in Ghana drew him home. He saw a stark contrast between his college experience, which stressed critical thinking and problem solving, and the rote learning common in Ghana’s educational system. He was also convinced that a focus on ethical leadership in the next generation of Ghana’s leaders was the best means for combating pervasive corruption.

Students at Ashesi choose among degree programs in business management, computer science, management information systems, and engineering. All students participate in a four-year leadership seminar on ethics, collaboration, and entrepreneurship that concludes with a service-learning component. Fostering ethical leadership is central to the university’s ethos, and in 2008, students established an honor code holding themselves responsible for ethical behavior, the first of its kind in African universities. In addition, Awuah places an emphasis on ethnic, economic, and gender diversity in the Ashesi community, and the recently opened school of engineering will focus on gender parity in its admissions.

In a little over a decade, Ashesi is already firmly established as one of Ghana’s premier universities. Every one of its graduates has found quality employment, and almost all remain in Africa, where many have started much-needed information technology businesses. Awuah’s innovation in higher education is not only empowering individual students; it also has the potential to transform political and civil society in Ghana and other African nations by developing a new generation of leaders and entrepreneurs.

Patrick Awuah received B.S. and B.A. degrees (1989) from Swarthmore College and an M.B.A. (1999) from the University of California at Berkeley. He was an engineer and program manager at Microsoft (1989­–1997) prior to founding Ashesi University in 2002 in Accra, Ghana. In addition to serving as president of Ashesi, he is also a fellow of the African Leadership Initiative of the Aspen Global Leadership Network and a member of the U.S. Council on Foreign Relations.