Illuminating the social, psychological, and emotional dimensions of controversial subjects, such as state-sponsored violence, in works that challenge the modern aesthetic of contemporary documentary cinema in both intimacy of focus and visual construct. 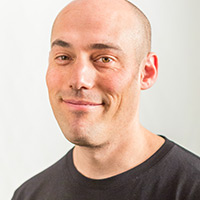 Joshua Oppenheimer is a documentary filmmaker illuminating the social, psychological, and emotional dimensions of controversial subjects in works that redefine the dynamic between filmmaker and subject, film and audience. Through a unique mode of filmmaking that mixes the real and the invented, he is challenging the modern aesthetic of contemporary documentary cinema in both intimacy of focus and visual construct. Two early works, The Entire History of the Louisiana Purchase (1998) and These Places We’ve Learned to Call Home(1996), use archival footage, on-screen interviews, and fantastical settings to humanize religious extremists, antigovernment militia members, and science fiction fanatics.

In conducting interviews for his 2003 film, The Globalization Tapes, which brings to light the little-known exploitation of low-wage plantation workers in Sumatra, Indonesia, Oppenheimer began to explore the national political violence of 1965–1966. The resulting film, The Act of Killing (2012), challenges audiences to observe and reflect upon a state-sponsored massacre of civilians. In 1965, the disposition of then-President Sukarno in favor of the U.S.-backed President Suharto led to the massacre of as many as two million citizens labeled communists or “enemies of the state.” After teaching himself to speak the local language, Oppenheimer spent several years identifying and interviewing hundreds of former death squad members, some of whom agreed to participate in on-screen re-creations of their crimes. The behind-the-camera recollections of events, casual interviews, and deliberate stagings culminate in a disturbing collage of theater and remembrance through the eyes of the executioners who did not hide their crimes decades ago and publically boast about them now, offering an unusually intimate view of the psychology and social networks of living mass murderers. The audience becomes engaged in a profound drama about recognition and self-knowledge, as we see both the subjects’ attempts to restage their crimes and their reactions to what has been filmed when Oppenheimer plays it back for them.

Oppenheimer’s latest film, The Look of Silence (2014), centers on the survivors of these victims as they courageously examine the role of their neighbors in the governmental purge. Through this film diptych and essays about the art and arc of filming these stories, Oppenheimer is creating an opportunity for broad accountability and eventual healing in a community that has been grieving for nearly half a century and prompting new ways of thinking about impunity, complicity, and contrition in the context of state-sponsored violence.

Joshua Oppenheimer received a B.A. (1997) from Harvard College and a Ph.D. (2005) from Central St. Martins College of Arts and Design, University of the Arts London. In addition to his ongoing filmmaking projects, Oppenheimer is a partner at the Danish production company, Final Cut for Real, and a reader in the Department of Photography and Film and director of the Centre for Documentary and Experimental Film at the University of Westminster in London.