Rendering the beauty and meaning of contemporary Arab poetry accessible to an English reader and highlighting the invaluable role of literary translation in bridging cultural divides. 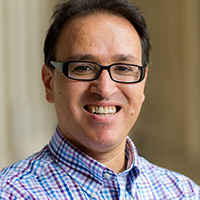 Khaled Mattawa is a cultural ambassador and poet-translator of Arabic poetry giving voice to a vast literature largely unknown in the Western hemisphere. In masterful translations that evoke the rhythm and cadence of Arabic, he renders the beauty and meaning of the poems accessible to an English reader.

He has published English translations, many the first available, of the work of contemporary poets highly respected in the Arab world, such as Amjad Nasser (Jordan), Saadi Youssef (Iraq), Adonis (Syria), and Fadhil Al-Azzawi (Iraq), as well as women poets whose names may be less familiar, such as Iman Mersal (Egypt), Joumana Haddad (Lebanon), and Maram Al-Massri (Syria). His translations do not replicate the meter or rhyme of the original, nor do they mimic traditional English forms; rather, they are creative reproductions with words translated or replaced, sentences and spaces rearranged, but with fidelity to the author’s spirit. The translated poems occupy a transitional space between two cultural traditions. Mattawa’s own poetry exhibits a similar quality, blurring time and space to impart the complexity of a transnational identity.

In addition to his work as a poet and translator, Mattawa has also written insightful essays on contemporary Arab and Arab American poetry and co-founded the Arete Foundation of Arts and Culture to support and promote the creative arts in Libya. Through his critical essays, his poetry, and his translations, Mattawa serves as a mediator between Arab and American culture and highlights the invaluable role of literary translations in bridging cultural divides.

Khaled Mattawa received a B.A. (1989) at the University of Tennessee at Chattanooga, an M.A. and M.F.A. (1994) from Indiana University at Bloomington, and a Ph.D. (2009) from Duke University. He is currently an associate professor in the Department of English Language and Literature at the University of Michigan, Ann Arbor. In addition to translating numerous volumes of Arab poetry, he is author of Mahmoud Darwish: The Poet’s Art and His Nation (2014); co-editor of Post Gibran: Anthology of New Arab American Writing (1999) and Dinarzad’s Children: An Anthology of Contemporary Arab American Fiction (2004, 2009); and the author of four collections of poetry, including Tocqueville (2010).