Jazz Composer and Saxophonist | Class of 2014

Infusing iconic spontaneous music idioms with the melodic, rhythmic, and structural components of an eclectic range of musical traditions to create a distinctive new sound. 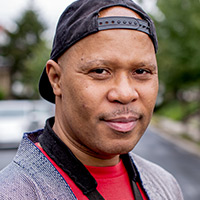 Steve Coleman is an alto saxophonist and composer whose technical virtuosity and engagement with musical traditions and styles from around the world are expanding the expressive and formal possibilities of spontaneous composition.

Whether performing solo or with his regular ensemble, Steve Coleman and Five Elements, Coleman delivers signature performances of notated works and brings a masterful facility to intricate and complex improvised pieces. His original compositions weave disciplined rhythmic structures, refined tonal progressions, and overlapping and mixed meters into soulful and fluid interpretations. In his improvisational performances, Coleman energizes and updates iconic musical idioms in the creative traditions of luminaries like John Coltrane and Charlie Parker by infusing them with melodic, rhythmic, and structural components inspired by music of the larger African Diaspora, as well as from the continents of Africa, Eurasia, and the Americas (in particular, West Africa, Cuba, Brazil, Europe, India, and Indonesia). His work also draws heavily on inspiration from nature, metaphysics, and science, integrating, for example, patterns derived from the cycles and relationships of the planets in our solar system or, as on Functional Arrhythmias (2013), the pulsating patterns of the human heart.

Coleman’s commitment to mentorship and community has also distinguished his career. M-Base (Macro-Basic Array of Structured Extemporizations), a cooperative that Coleman co-founded in the mid-1980s and that is still vital today as the non-profit organization M-Base Concepts, Inc., provides a supportive environment for musical experimentation and original performance, and his workshops, seminars, online instruction, and interdisciplinary collaborations encourage younger musicians both here and abroad to push the boundaries of their craft. Influential well beyond the scope of saxophone performance and composition, Coleman is redefining the vocabulary and vernaculars of contemporary music.

Steve Coleman attended Illinois Wesleyan University (1974–1976) and Roosevelt University (1976–1977. In addition to giving workshops worldwide, he has been an artist in residence at the Lucerne University of Applied Sciences and Arts (2009–2010) and the Thelonious Monk Institute (2008–2009) and a faculty member at the University of California at Berkeley (2000–2002), the Stanford Jazz Workshop (1995–1996), and the Banff School of Fine Arts (1985–1991). His extensive catalog of recordings includes Harvesting Semblances and Affinities (2010), Invisible Paths: First Scatterings (2007), and Resistance Is Futile (2002), among many others.