Applying mathematical approaches to the analysis and modeling of brain connectivity and enhancing our understanding of how these connections give rise to the functions the brain performs. 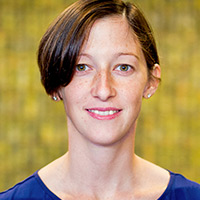 Danielle Bassett is a physicist using tools from network science and complex systems theory to enhance our understanding of connectivity and organizational principles in the human brain. Combining a strong background in physics with training and collaborations in neuroscience, Bassett adapts mathematical approaches associated with the study of complex networks (such as computer or social networks) to analyze interactions among neurons in different regions of the brain while a person does certain activities (e.g., learn something new or try to remember a face), thereby unraveling how these connections give rise to the functions or jobs the brain performs.

With her standard-setting work on graph theoretic characterizations of interconnections within the brain—and, importantly, how those connections change over time and under varying conditions—Bassett determines the specific relationship between network organization and cognitive ability. Using brain imaging data of people learning a motor task over three distinct time periods, Bassett and colleagues found that a person’s ability to learn can be predicted based on the brain’s flexibility, or the ability of different areas of the brain to connect in different combinations, and precision in identifying existing brain functions that can be used to accomplish the new behavior.

Bassett complemented this work on dynamic reconfiguration of brain networks over time by illustrating how functional connectivity in the brain is modified by memory and language processing, and by psychiatric diseases such as schizophrenia. With additional lines of research focused on dynamics in social and physical networks, including decision making among large populations during evacuations and sound propagation through granular materials, Bassett is not only revealing new insights regarding learning, disease diagnostics and therapeutics, and treatment of brain injury, but she is also making contributions to disciplines as far-ranging as cell biology, materials science, and social systems.

Danielle Bassett received a B.S. (2004) from Pennsylvania State University and a Certificate of Postgraduate Study (2005) and Ph.D. (2009) from the University of Cambridge. She was a postdoctoral associate (2009–2011) and a Sage Junior Research Fellow (2011–2013) at the University of California, Santa Barbara, before joining the faculty of the University of Pennsylvania, where she is currently the Skirkanich Assistant Professor of Innovation in the Department of Bioengineering. Her scientific papers have appeared in such journals as the Proceedings of the National Academy of Sciences (PNAS), Neuron, Physical Review E, Trends in Cognitive Sciences, and Chaos, among others.