Blending fantastical elements with psychological realism to construct wildly imaginative settings and characters in tales of transformation and redemption. 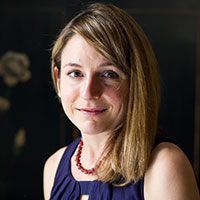 Karen Russell is a fiction writer whose haunting yet comic tales blend fantastical elements with psychological realism and classic themes of transformation and redemption. Setting much of her work in the Everglades of her native Florida, she depicts in lyrical, energetic prose an enchanting and forbidding landscape and delves into subcultures rarely encountered in contemporary American literature.

The vividly realized stories in her debut collection, St. Lucy’s Home for Girls Raised by Wolves (2006), revolve around a cast of adolescents, often parentless, caught between the worlds of childhood and adulthood, wilderness and civilization, island and mainland, the living and the dead. In her novel Swamplandia! (2011), Russell revisits and expands on the opening story of her earlier collection, “Ava Wrestles the Alligator,” to explore the intricacies and consequences of a family’s grief following the death of their matriarch. Narrated primarily by its thirteen-year-old protagonist, Ava, the novel weaves together a chilling odyssey into a swampland netherworld; lush descriptions of the flora, fauna, and history of the Everglades region; and profound observations about human nature in the face of irreparable loss.

Russell’s recently published collection of stories, Vampires in the Lemon Grove (2013), navigates new and diverse terrain, from a nineteenth-century silk factory in Japan, to a drought-ravaged homesteader settlement on the plains of Nebraska, to the traumatic memories of an Iraq War veteran. Through the wildly inventive premises of these and other stories, Russell is widening the scope of her already far-reaching and distinctive imagination.

Karen Russell received a B.A. (2003) from Northwestern University and an M.F.A. (2006) from Columbia University. Her short stories have appeared in such publications as The New Yorker, Granta, Zoetrope, and Oxford American. She was a fellow at the Cullman Center (2010) and at the American Academy of Berlin (2012), and she has taught writing and literature at Columbia University (2006–2009), Williams College (2009), Bard College (2011), Bryn Mawr College (2012), and the University of Rutgers, Camden (2013).