Evoking a sense of our shared humanity in works that explore the diversity of the African American experience and imbue the lives of ordinary people with epic significance. 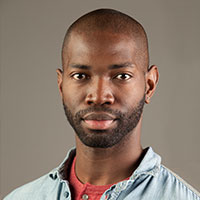 Tarell Alvin McCraney is a playwright exploring the rich diversity of the African American experience in works that imbue the lives of ordinary people with epic significance. Complementing his poetic, intimate language with a musical sensibility and rhythmic, often ritualistic movement, McCraney transforms intentionally minimalist stages into worlds marked by metaphor and imagery.

His most well-known works, a triptych collectively titled The Brother/Sister Plays (2009), weave West African Yoruban cosmology into modern-day stories of familial self-sacrifice, unrequited love, and coming of age. The audience becomes an essential part of the story as the characters speak their stage directions and inner feelings directly to the viewers. In Head of Passes (2013) and Choir Boy (2012), McCraney draws on themes that run throughout the Book of Job and traditional spirituals, respectively, to explore the role of faith and tradition in two very different close-knit worlds. Head of Passes, set in the isolated marshlands of the Mississippi River Delta, dramatizes a matriarch’s struggle to maintain her faith as her world literally falls apart around her. In Choir Boy, students at an elite boarding school remain united in their dedication to performing traditional spirituals even as they navigate the fraught nature of adolescent self-expression.

In addition to writing new works, McCraney is committed to bringing theatre to elementary and secondary school students, particularly in underserved communities in his hometown of Miami. His ninety-minute adaptation of Hamlet (2010), an intense, condensed version of the play set within a contemporized historical context, employs a visually explosive, expressive staging that engages audiences of all ages, whether or not they have a previous familiarity with Shakespeare. In telling stories that are simultaneously contemporary and universal, McCraney is demonstrating to new and younger audiences the ability of theatre to evoke a sense of our shared humanity and emerging as an important voice in American theatre.

Tarell McCraney received a B.F.A. (2003) from DePaul University and an M.F.A. (2007) from Yale University. He was the International Writer in Residence for the Royal Shakespeare Company (2008–2010), where he remains an associate artist, and a Hodder Fellow at the Lewis Center for the Arts at Princeton University (2009) before becoming an ensemble member of the Steppenwolf Theatre Company in 2010. He is also a resident playwright at New Dramatists and a member of Teo Castellanos D-Projects in Miami. His additional plays include Wig Out! (2008) and American Trade (2011), and his works have been performed at such venues as the Public Theater, the McCarter Theatre at Princeton University, the Young Vic (London), and Steppenwolf Theatre.