Working at the interface of computer science and electrical engineering to improve the speed, reliability, and security of data exchange, particularly in wireless networks. 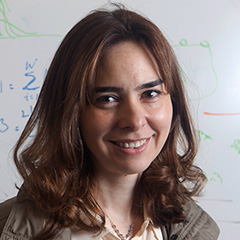 Dina Katabi is a communications researcher working at the interface of computer science and electrical engineering to improve the speed, reliability, and security of data exchange. Katabi has contributed to a range of networking issues, from protocols to minimize congestion in high-bandwidth networks to algorithms for spectrum analysis, though most of her work centers on wireless data transmission.

In WiFi (802.11) networks, it is common for two devices to send packets of information nearly simultaneously, resulting in partial data loss and rejection of both packets, a process that is repeated until each packet is transmitted without interference. Katabi and colleagues developed a “ZigZag” algorithm that reconstructs the contents of the collided packets by combining the usable fragments from each, thereby reducing the retransmission rates significantly. Additionally, while WiFi signals are typically thought of as communication signals, Katabi and her students have shown that they can be used to track the movements of humans, even if they are in a closed room or behind a wall. This technology can also be used to send commands to a computer via a person’s gestures as the signals reflect off of the person’s body.

Because 802.11 networks are radio broadcasts, their signals are vulnerable to interception and manipulation by nefarious third parties. Katabi designed a method that uses random wireless signals to protect low-power devices during the exchange of encryption keys and make it impossible for intermediaries to insert themselves undetected (“man-in-the-middle” attack) in the data stream. For safety reasons, some wireless devices need to transmit unencrypted data—for example, pacemakers—which makes them sensitive to malevolent interference. She and her colleagues are designing wearable devices that protect pacemakers against unwanted manipulation while allowing medical personnel emergency access without security codes.

Additional projects, such as showing the potential of radio interference to increase bandwidth and developing data protocols that address network congestion, demonstrate Katabi’s ability to translate long-recognized theoretical advances into practical solutions that could be deployed in the real world. Through her numerous contributions, Katabi has become a leader in accelerating our capacity to communicate high volumes of information securely without restricting mobility.

Dina Katabi received a B.S. (1995) from Damascus University and an M.S. (1999) and Ph.D. (2003) from the Massachusetts Institute of Technology. She joined the faculty of MIT in 2003, where she is currently a professor in the Department of Electrical Engineering and Computer Science, director of the MIT Center for Wireless Networks and Mobile Computing ([email protected]), and a member of the Computer Science and Artificial Intelligence Laboratory, where she leads the Networks at MIT group (NETMIT).