Developing new technologies for the preservation of rare, damaged, and deteriorating sound recordings of immense value to our cultural heritage. 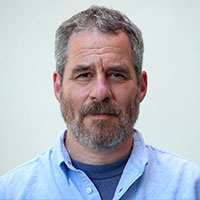 Carl Haber is an experimental physicist developing new technologies for preservation of inaccessible and deteriorating sound recordings. A vast amount of the world’s cultural heritage has been captured on fragile or obsolete recording media such as wax cylinders; shellac, lacquer, and metal discs; and tinfoil. Collections of experimental, musical, ethnographic, and historic content in libraries and museums around the world can no longer be regularly accessed by the public and are in danger of being lost forever.

Using insights from his work on imaging subatomic particle tracks in high-energy physics experiments, Haber and colleagues developed IRENE (Image, Reconstruct, Erase Noise, Etc.), a non-contact method for extracting high-quality sound from degrading or even broken analog recordings on two- or three-dimensional media. A disc or cylinder is placed in a precision optical metrology system, where a camera following the path of the grooves on the object takes thousands of images that are then cleaned to compensate for physical damage; the resulting data are mathematically interpolated to determine how a stylus would course through the undulations, and the stylus motion is converted into a standard digital sound file.

Sensitive to the importance of cultural stewardship and archival institutions’ mandate to both preserve and provide access to these historic recordings, Haber has collaborated with archivists and researchers in the United States and abroad to test IRENE on a variety of recording media. The method has been used to successfully play several recordings for the first time, including an 1860 phonautogram, the oldest known sound recording of a human voice, and the only known recording of Alexander Graham Bell’s voice. Currently working to enable mass digitization by making the technology more affordable, portable, and flexible, Haber is poised to revolutionize the preservation of rare, damaged, and deteriorating sound recordings of immense value to our cultural heritage.

Carl Haber received a B.A. (1980), M.Phil. (1982), and Ph.D. (1985) from Columbia University. He has been affiliated with Lawrence Berkeley National Laboratory since 1986, where he is currently a senior scientist in the Physics Division. Since beginning research on the preservation and restoration of recorded sound in 2002, he has worked with archivists at the Library of Congress, the Thomas Edison National Historic Site, the Phoebe A. Hearst Museum of Anthropology, and the Smithsonian Institution, among others.