Establishing links between ancient plant remains and present-day ecosystems through a pioneering and integrative approach to evolutionary plant biology. 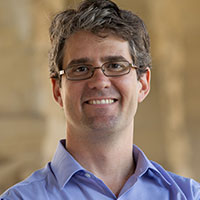 C. Kevin Boyce is a paleobotanist whose studies of both extinct and living plants across multiple timescales are establishing direct links between ancient remains and present-day ecosystems and advancing our understanding of potential ecological changes as the planet warms. Boyce has emerged as a leader in a new subfield of paleontology that brings patterns of development and physiological processes of extant organisms to bear on the study of fossils.

In collaboration with colleagues in plant physiology, geochemistry, and climate science, Boyce has advanced interpretations of how major plant components have evolved by using such modern technology as X-ray microscopy and spectroscopy to examine plant specimens at the tissue and cellular level. His studies of leaf vein density demonstrated the development and critical importance of angiosperms’ (flowering plants) high vein density, which allows them to cycle water at much faster rates than other kinds of plants. By incorporating these findings into climate models, Boyce showed that the evolution of angiosperms’ unusual transport capabilities altered and intensified the hydrological cycle of tropical ecosystems, giving birth to the rainfall patterns and lush biodiversity of modern rainforests.

With these propositions, Boyce is solving mysteries about the morphology of plants that have puzzled scientists for decades and establishing macroecological perspectives of emergent biodiversity, while also challenging evolutionary scientists to embrace new angles of research to advance knowledge and discovery.

C. Kevin Boyce received a B.S. (1995) from the California Institute of Technology and a Ph.D. (2001) from Harvard University. From 2001 to 2003, he held a National Research Council Associateship with the NASA Astrobiology Institute. He was affiliated with the University of Chicago (2003–2013) prior to joining the faculty of Stanford University as an associate professor in the Department of Geological and Environmental Sciences. His scientific publications have appeared in such journals as Geophysical Research Letters, Geobiology, PNAS, and Paleobiology.