Choreographer and Dancer | Class of 2013

Exploring the relationship between identity and personal history through a unique hybrid of traditional and informal dance styles. 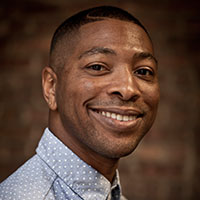 Kyle Abraham is a choreographer and dancer probing the relationship between identity and personal history through a unique hybrid of traditional and vernacular dance styles that speaks to a new generation of dancers and audiences. With diverse training in music, visual art, and dance—and breathtaking skill as a performer—Abraham’s highly physical dance vocabulary reflects the youthful energy of the hip-hop and urban dance he encountered in his adolescence as well as a strong grounding in modern dance technique.

In works for his own company, Kyle Abraham/Abraham.in.Motion, and others, startling shifts in gestures and music create a rich dialogue between internal emotional landscapes and shared cultural experiences. The Radio Show (2010), set in his native Pittsburgh, juxtaposes Abraham’s feelings of dislocation and loss as he witnesses his father’s decline due to Alzheimer’s with the bereavement of the African American community after the abrupt departure of a beloved urban radio station that had served as an integral means of communal dialogue.

In his most recent work, Pavement (2012), Abraham creates a moving and powerful portrait of urban life consumed by gang and police violence, employing a score that incorporates baroque opera, contemporary classical compositions, and R&B as well as multimedia elements and spoken word. Near the end of the piece, the recurring motif of bodies forced onto the ground into a handcuffed position takes on new meaning: as the six dancers move into different arrangements of stacked bodies, with dancers wriggling out or turning over to face those above, we see that while often filled with brutality, their lives are also marked by a powerful camaraderie that can be a source of comfort and beauty.

Although early in his career, Abraham is establishing a singular choreographic style and creative vision for exploring important contemporary issues with a clarity and beauty that resonates with a wide range of audiences.

Kyle Abraham received a B.F.A. (2000) from the State University of New York at Purchase and an M.F.A. (2006) from New York University. His choreographic works have been performed by both his company, Kyle Abraham/Abraham.in.Motion (founded in 2006), and others at such venues as Jacob’s Pillow Dance Festival, the Joyce Theatre, Harlem Stage, Danspace Project, On the Boards, the Kelly-Strahorn Theater (Pittsburgh), and REDCAT (Los Angeles), among many others.