Revealing the consequences of military conflict abroad in illuminating documentaries that portray the lives and intimate experiences of families and communities largely inaccessible to the American media. 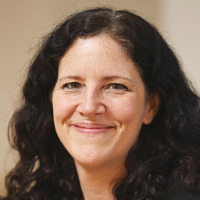 Laura Poitras is a filmmaker whose elegant and illuminating documentaries capture the lives and intimate experiences of families and communities largely inaccessible to the American media. Following an early career in experimental film, Poitras turned her attention to contemporary social issues, offering insight into complex topics with a unique cinematic lyricism. Her signature work, a trilogy of feature-length documentaries about America’s post–September 11 war on terror, explores the human consequences of military conflict abroad from unusual vantage points, reflecting relationships she forges over months and years of close interaction. My Country, My Country (2006), filmed entirely by Poitras while working alone in Iraq, paints a compelling portrait of Dr. Riyadh, a Sunni physician running for political office in Iraq’s first democratic election, and of a country seeking peace and stability under American occupation. In The Oath (2010), filmed in Yemen and Guantanamo Bay, Poitras contrasts the stories of Abu Jandal, a former jihadist and bodyguard to Osama bin Laden, and of his brother-in-law, Salim Hamdan, who became the first man to face an American military tribunal. The “oath” in the title refers to Jandal’s initial allegiance to Al Qaeda and his subsequent renunciation of it following 9/11, but it also alludes to the pledge of loyalty to the United States of an FBI interrogator who testifies before Congress against enhanced interrogation techniques. The final film of the trilogy, shot in the United States and as yet untitled, focuses on the personal impact of prolonged international conflict on those abroad and at home. In these and other works in progress, this courageous filmmaker is chronicling some of the most pressing issues of the twenty-first century, particularly the war on terror.