Enriching understanding of the little-explored world of the African diaspora in America in tales distilled from the experience of immigrants whose memories are seared by escape from violence in their homelands. 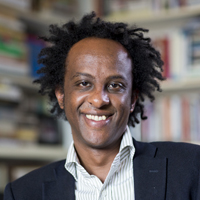 Dinaw Mengestu is a young writer whose novels and nonfiction pieces open a window into the little-explored world of the African diaspora in America. A native of Ethiopia who came to the United States with his family at the age of two, Mengestu composes tales distilled from the experience of immigrants whose memories are permanently seared by escape from violence in their homelands. His debut novel, The Beautiful Things That Heaven Bears (2008), is a poignant chronicle of exile that eschews sentimentality by refusing to allow its narrator—a struggling Ethiopian refugee in a gentrifying neighborhood of Washington, DC—to find an easy form of solace or redemption. In this rich and multidimensional tale, Mengestu paints a powerful portrait of lives uprooted and remade in the wake of political violence as well as the fractures and tensions that characterize rapidly changing areas of contemporary urban America. He explores the transformation of the immigrant experience through the increasing flow of information and people between their adopted homes and their countries of origin in How to Read the Air (2010), which chronicles a young man’s efforts to comprehend and come to terms with his parents’ complicated past. In addition to his fiction writing, Mengestu is also a talented freelance journalist, recently making forays into war-torn regions of sub-Saharan Africa to write about life in Darfur, northern Uganda, and eastern Congo near the border with Rwanda. Mengestu’s depictions of the loss of culture, community, and landscape endured by immigrants in America are broadening the thematic concerns and voices encompassed by the American novel.

Dinaw Mengestu received a B.A. (2000) from Georgetown University and an M.F.A. (2005) from Columbia University. His journalism and fiction have appeared in such publications as Harper’s, Granta, Rolling Stone, The New Yorker, and the Wall Street Journal.