Illuminating the complex interplay between microbes and the host immune system and the role certain bacteria may play in the development, or mitigation, of a broad range of human diseases. 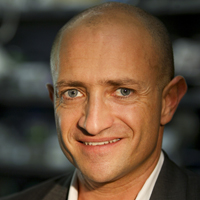 Sarkis Mazmanian is a microbiologist investigating the mechanisms underlying the symbiotic relationship between hosts and their beneficial microbial partners. Non-pathogenic bacteria colonize virtually every tissue type with exposure to the external environment; the enteric bacteria found in the gastrointestinal (GI) tract, which contains by far the largest number and species of bacteria, have long been known to provide benefits such as delivering certain nutrients and protection against pathogenic bacteria. In a series of studies, Mazmanian and colleagues have teased out the complex interplay between gut bacterial species and the host immune system. His results show, for example, that the probiotic species B. fragilis expresses a molecule known as polysaccharide A, which suppresses a specific immune pathway in the host that would otherwise generate an inflammatory response to a different bacterium, H. hepaticus. Absent this suppression, H. hepaticus triggers pathologic changes in the GI tract similar to ulcerative colitis and Crohn’s disease. More recently, Mazmanian found that enteric bacteria can influence the progression of immune activity in distant tissues such as the nervous system. In a mouse model of multiple sclerosis (a human autoimmune disease), he demonstrated that germ-free animals, which are otherwise resistant to induced autoimmune brain inflammation, become susceptible after their GI tract is exposed to segmented filamentous bacteria, suggesting a specific role that intestinal bacterial fauna could play in the development of autoimmune disorders in tissues distant from the intestines (e.g., the central nervous system). On the basis of his results and others’, Mazmanian has posited that harmless bacteria induce host immune tolerance by manipulating pathways that distinguish self from pathogen, a distinction that goes awry in autoimmune diseases. By elucidating the critical role of these microbes in human health, Mazmanian is laying the foundation for a new understanding of human-microbiome symbiosis that could lead to new therapies or preventive treatments for a broad class of human diseases.

Sarkis Mazmanian received a B.S. (1995) and a Ph.D. (2002) from the University of California at Los Angeles. Prior to joining the faculty of the California Institute of Technology in 2006, where he is currently a professor in the Division of Biology, he was affiliated with the University of Chicago (2002–2005) and Harvard Medical School (2005–2006). His scientific articles have appeared in such publications as Science, Nature, PNAS, and Cell.