Exploring the nature of vision and the difference between how we see reality and how a camera records it in evocative, abstract compositions that focus attention on the act of looking and the process of perception. 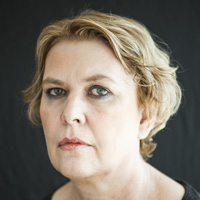 Uta Barth is an artist whose evocative, abstract photographs explore the nature of vision and the difference between how a human sees reality and how a camera records it. In contrast to documentary and confessional modes of photography, Barth intentionally depicts mundane or incidental objects in nondescript surroundings in order to focus attention on the fundamental act of looking and the process of perception. In white blind (bright red) (2002), she investigates both literal and metaphorical modes of perception in ghostly compositions that mimic the afterimages that persist in one’s visual memory after turning away from an object. Her recent series, …and to draw a bright, white line with light (2011), marks the first time Barth has intervened in the staging of her photographs. By manipulating curtains in her home, she created lines and curves of light that expand from a sliver to a wide ribbon across a sequence of large-scale, dramatically cropped images that evoke the subtle passage of time while also highlighting the visceral and intellectual pleasures of seeing. As Barth continues to expand her photographic practice to probe the theme of perception in new and inventive ways, she is encouraging viewers to reconsider the traditional functions and expectations of the photographic image.