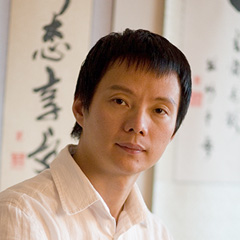 Shen Wei, founder and artistic director of Shen Wei Dance Arts, is a choreographer who combines Eastern and Western influences and multiple artistic disciplines to create a bold and visually arresting form of dance-theater. Born in China’s Hunan province and trained from his youth in calligraphy, painting, and Chinese operatic performance, Shen became a founding member of the Guangdong Modern Dance Company, the first modern dance company in China, prior to moving to New York in 1995. Through choreographed movements that are precise and inventive, he and his dancers perform highly stylized steps and gestures inspired by Western dance traditions as well as Chinese opera, acrobatics, and martial arts. With the compositional rigor of a visual artist, he incorporates vivid colors, striking costume design, and imaginative use of space into theatrical works that are, at once, kinetic paintings. Staging his dances on a grand scale with a high level of production detail, Shen defies expectations with each new work. Folding (2000) begins with dancers draped in dramatic red against a shimmering blue backdrop and concludes with the chanting of Tibetan Buddhist monks, while his Rite of Spring (2003) offers a spare, minimalist approach to a classic modernist score. In these and other works, Shen Wei fuses a diverse range of art forms into an aesthetically striking dance language that is all his own.

Shen Wei received degrees from the Hunan Arts Academy and the Guangdong Dance School. He performed with the Hunan State Xian Opera Company (1984-1989) and the Guangdong Modern Dance Company (1991-1994) prior to founding Shen Wei Dance Arts in 2000. His company has performed in festivals and at venues throughout the U.S. and internationally, including the Lincoln Center Festival, the American Dance Festival, Jacob’s Pillow, Sadler’s Wells, and the Kennedy Center for the Performing Arts, among many others. A painter as well as a choreographer, Shen’s works have been exhibited in New York City and Hong Kong.