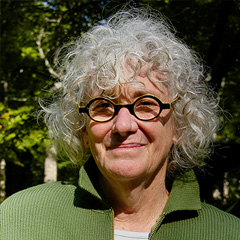 Joan Snyder is an accomplished artist whose abstract paintings defy categorization and traverse genres. Over the four decades of her prolific career, Snyder’s body of work has continually evolved in style and form. Beginning with her early “stroke” paintings — intense swaths of color painted over pencil-drawn grids — her works have been essentially narratives of both personal and communal experiences. In these paintings, each brush stroke is like a character in a story, pulsing with emotion and vitality. After abandoning formal grids as the basic structure of her paintings, Snyder’s work became more explicitly gestural and rooted in memory, while at the same time more complex materially. She began to incorporate text scrawled into the paint or frames, as well as found objects such as herbs, sticks, feathers, mud, and nails, to create works saturated with feeling. In The Cherry Tree (1993), for instance, a work expressing Snyder’s grief surrounding her father’s death, she uses paint, papier-mâché, and straw to render an image that is both elegiac and thriving. While her paintings mirror her personal experience, the visual messages she provides through her images convey universal and readily understood emotions. Through a fiercely individual approach and persistent experimentation with technique and materials, Snyder has extended the expressive potential of abstract painting and inspired a generation of emerging artists.

Joan Snyder received an A.B. (1962) from Douglass College and an M.F.A. (1966) from Rutgers University. Her work has appeared in numerous solo and group exhibitions at such national venues as the Museum of Modern Art in New York, the Whitney Museum of American Art, the Museum of Fine Arts, Boston, and the Corcoran Gallery of Art. In 2005, the Jewish Museum in New York presented a retrospective of Snyder’s work.