Exploring periods of American history from unexpected vantage points and addressing some of society’s most complex issues with empathy and humor. 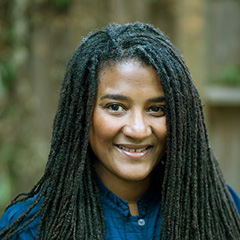 Lynn Nottage is an original voice in American theater, a playwright whose entertaining and thought-provoking works address contemporary issues with empathy and humor. Her ambitious, expressive early works, including Crumbs from the Table of Joy, Mud River Stone, and Por’Knockers, reveal Nottage’s rich poetic imagination as she portrays periods of American history from unexpected vantage points and crafts complex characters of a kind that have garnered little notice among other writers and historians. Her more recent works, Intimate Apparel and Fabulation, are considered to be her most accomplished thus far and represent major artistic achievements. Intimate Apparel, a prize-winning drama, is the story of a young black seamstress in early 20th-century New York, a woman working her way through the social confines of her time — predicaments that continue to haunt us today. Nottage’s imaginative exploration of history, her ability to find resonance in unexpected moments in the past, and her sensitive evocation of social concerns have made her a powerful voice in theater. She is a dramatist who will continue to provide us with provocative plays in which her characters confront some of society’s most complex issues.

Lynn Nottage received a B.A. (1986) from Brown University and an M.F.A. (1989) from the Yale University School of Drama, where she is currently a visiting lecturer. Her plays have been produced throughout the U.S. and Europe at such venues as the Second Stage Theatre, New York, the Tricycle Theatre, London, and the Steppenwolf Theatre, Chicago, among many others.