Paying tribute to the daily lives of anonymous African-Americans through poetic and intricately constructed tableaux. 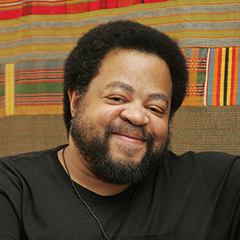 Whitfield Lovell is an artist whose poetic and intricately crafted tableaux and installations document and pay tribute to the passage of time and to the daily lives of anonymous African-Americans. Inspired by images from his archive of photographs, tintypes, and old postcards from the end of the Civil War to the beginning of the civil rights movement, Lovell provides these obscure figures with identity and dignity. He creates meticulously rendered, life-sized, charcoal portraits on such wooden objects as sections of walls, fences, or barrels, evoking a haunting sense of their presence. He places these portraits in the context of found, everyday objects — including frying pans, spinning wheels, bed frames, clocks, irons, and musical instruments — to reveal the individual through items related to his or her life. These compelling and seemingly simple installations are informed by contemporary art practice as well as folk art, vernacular art, and the physical conditions of marginalized communities. Creating remarkably elegant works, Lovell evokes memories of the past while transcending the specifics of time and space.

Whitfield Lovell received a B.F.A. (1981) from the Cooper Union School of Art. He taught at the School of Visual Arts in New York from 1987 to 2001 and has been a visiting artist at such institutions as Rice University (1995), the Skowhegan School of Painting and Sculpture (2001), and the Contemporary Art Center of Virginia (2002). Lovell’s work has appeared in numerous solo and group exhibitions at national venues such as the Seattle Museum of Art, the Smithsonian American Art Museum, the Whitney Museum of American Art, and the Metropolitan Museum of Art.