Leading a revival of Mississippi Delta blues by infusing traditional styles with influences from jazz, reggae gospel, and African and Caribbean folk styles. 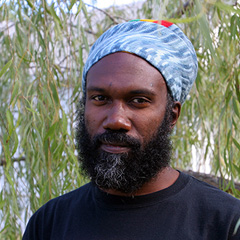 Corey Harris is a guitarist, songwriter, and performer who is leading a contemporary revival of country blues with a fresh, modern hand. He is a powerful and compelling singer and an accomplished guitarist whose musical artistry is complemented by serious explorations of the historical and cultural conditions that gave rise to the blues. He demonstrates his respect for the past and his mastery of the Mississippi Delta blues tradition by interpreting the songs of early blues luminaries in new ways, while also creating an original vision of the blues by infusing his music with a broad range of sounds and styles. Beginning with his 1995 recording Between Midnight and Day, Harris has explored acoustic, rural blues styles with increasing success. Subsequent recordings, such as Greens from the Garden (1999), Mississippi to Mali (2003), and Daily Bread (2005), reflect Harris’ reinterpretations of the African influences on American blues through ethnographic research and musical collaborations in Mali, Guinea, and elsewhere. He has demonstrated the boundless expressive power of blues music by weaving traditional styles together with elements from jazz, reggae, gospel, and African and Caribbean folk music. Maturing from interpreter to creator, his imaginative compositions spark renewed interest in the musical potential of the blues. Sometimes forgoing the traditional 12-bar structure and mimetic repetition common to most blues music, Harris forges an adventurous path marked by deliberate eclecticism. With one foot in tradition and the other in contemporary experimentation, he blends musical styles often considered separate and distinct to create something entirely new for the 21st century.

Corey Harris received a B.A. (1991) from Bates College in Lewiston, Maine. His additional recordings include Fish Ain’t Bitin’ (1997), Vu-Du Menz (with Henry Butler, 2000), Downhome Sophisticate (2002), and Zion Crossroads (2007). He has performed at venues and in festivals throughout the U.S. and abroad.

Select News Coverage of Corey Harris
"Corey Harris Is Not an Academic, But His World Sounds Will Take You to School"
Broward Palm Beach New Times
Corey Harris, 2007 MacArthur Fellow