Tracing the natural interactions of differentiating neurons in the development of complex, heterogeneous tissue to bring us closer to effective clinical treatments for central nervous system damage. 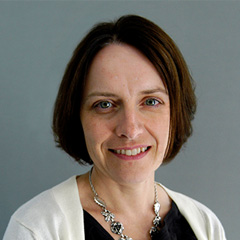 Sally Temple is a developmental neuroscientist who traces the mechanisms by which embryonic progenitor cells divide into highly specialized neurons and support cells. Though much research in stem cell biology focuses on very early development or engineering replacement organs, Temple focuses her research on the intermediate stages of development to understand the interactions of partially differentiated stem cells to create complex, heterogeneous tissues like the central nervous system. During her training, she was able to isolate and culture a progenitor cell line of glia, which, among many functions, serve as the scaffolding for the neurons they surround. Her research indicates that internal counting mechanisms, rather than external signals in the progenitors, determine the number of cell divisions they undergo. Subsequently, Temple isolated and cultured multipotent cell lines in the embryonic cerebral cortex (a structure with a well-characterized layered structure). She has identified markers on progenitor cell lines and external signaling molecules that participate in maintaining and differentiating them. Recently, Temple has shown that progenitor cells gradually lose their capacity to divide into cell types that normally form the earliest cortical layers; this effect can be delayed partially by reducing expression of a specific gene, Foxg1. Her results suggest that the limited success to date of embryonic stem cell transplants to repair neural damage could be due to introduction of stem cells at the wrong stage of development; it may be that progenitor cells further along in their differentiation will prove more effective. Through her basic research on the differentiation of neural progenitors, Temple brings us closer to developing effective clinical treatments for central nervous system damage due to trauma, neurodegenerative diseases, malignancy, or stroke.

Sally Temple received a B.A. (1982) from the University of Cambridge and a Ph.D. (1986) from University College London. She is the scientific director of the New York Neural Stem Cell Institute and serves as an adjunct faculty member at Albany Medical College, Rensselaer Polytechnic Institute, and SUNY Albany. Temple was previously a fellow of the Alden March Bioethics Institute. Her numerous articles have been published in such journals as Nature, Cell Stem Cell, Neuron, and Cell.