Designing experiments and devices to advance our understanding of the geometry of the universe and to trace the story of both its beginning and its end. 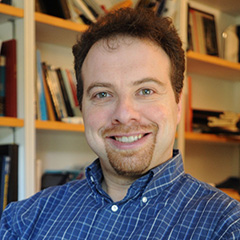 Adam Riess is a young astronomer whose observations are taking us to the edge of the universe, telling the story both of its beginning and its end. As a postdoctoral fellow, Riess served as first author of one of the seminal papers of 20th-century astronomy. He and his colleagues, along with a simultaneous report from a competing group, showed not only that the universe is expanding, as Hubble demonstrated decades ago, but also that the rate of expansion is actually accelerating. They accomplished this by measuring in the most distant regions of space the spectral properties of rare but well-characterized supernovas known as Type Ia. By comparing the brightness of the event (which indicates distance) with the redshift (which indicates velocity), they found a non-linear relationship — relative motion of more distant objects changes disproportionately with their distance. Since then, Riess has led rigorous efforts to use the Hubble Space Telescope to increase the precision of the data, thereby reducing the plausibility of alternative explanations of the original result. This finding has profound implications for cosmology, helping us to better understand the “shape” of the universe, as well as other areas of theoretical physics. In cosmology, it is understood that the observable mass in the universe cannot account for the measured rate of expansion. Theoreticians have postulated the existence of “dark matter” (mass that our current instruments cannot detect), but estimates suggest that even that is insufficient; some believe that massless “dark energy” represents the main driving force for cosmic acceleration. Riess is now actively engaged in designing experiments and devices to detect and measure dark energy.

Adam Riess received a B.S. (1992) from the Massachusetts Institute of Technology and an A.M. (1994) and Ph.D. (1996) from Harvard University. He has been a professor of physics and astronomy at Johns Hopkins University since 2006 and is also an astronomer at the Space Telescope Science Institute in Baltimore, Maryland. From 1996 to 1999, Riess was a Miller Fellow at the University of California, Berkeley.