Restoring structures from the distant past and identifying ancient technologies for use in contemporary constructions. 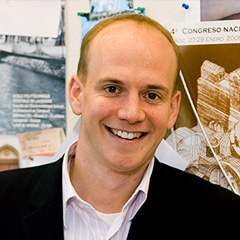 John Ochsendorf is a structural engineer and architectural historian who works to preserve historic structures and to reinterpret ancient technologies for contemporary use. In a discipline whose practitioners rarely venture into comparative cultural and historical studies, Ochsendorf is a pioneer in exploring alternative engineering traditions. His early studies investigated the construction of hand-woven, fiber suspension bridges that spanned the deep ravines and connected the territories of the Inca Empire. In addition to conducting fieldwork in Peru and analyzing historical accounts of these bridges, he developed a method for testing the strength of the ancient rope-weaving technique to produce the first data on its performance. His cross-cultural interest in bridges also led him to in-depth studies of suspension and cable-stayed bridges in Japan. More recently, Ochsendorf has turned his attention to identifying the causes of vault and buttress failures in French and Spanish Romanesque churches. Applying his understanding of structural mechanics to problems of masonry construction, his detailed analyses of barrel-vaulted churches are helping to evaluate the safety and condition of particular buildings and to develop practical strategies to address their vulnerabilities, stabilization, and restoration. For another recent project, Ochsendorf led his students in the design of England’s Pines Calyx dome, a robust, energy-efficient structure built from local resources using a tile vaulting system patented in the 19th century by Spanish architect Rafael Guastavino. While conducting structural assessments of historic monuments around the world, Ochsendorf develops new methods for establishing the stability of ancient buildings and draws important lessons from them that will guide the construction of more efficient architecture in the future.

John Ochsendorf received a B.Sc. (1996) from Cornell University, an M.Sc. (1998) from Princeton University, and a Ph.D. (2002) from Cambridge University. He is currently an associate professor in the Department of Architecture at the Massachusetts Institute of Technology.

In 2013, John Ochsendorf was named Class of 1942 Professor of Architecture and Engineering at the Massachusetts Institute of Technology. He is author of the monograph Guastavino Vaulting: The Art of Structural Tile (Princeton Architectural Press, 2010) and lead curator for the traveling exhibition Palaces for the People: Guastavino and America’s Great Public Spaces (2013–2014). He is a founding partner of the engineering consultancy Ochsendorf, DeJong, and Block. Ochsendorf has been named a MacVicar Fellow for exceptional teaching at MIT (2014), a senior fellow of the Design Futures Council (2011), and a fellow of the American Academy in Rome (2008). He contributed to the design of the Mapungubwe Interpretation Centre in South Africa, which was named the World Building of the Year at the World Architecture Festival in 2009.