Unsettling accepted wisdom about both local and global environmental change by exploring the ecological consequences of a wide range of Earth surface processes. 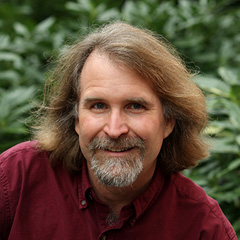 David Montgomery is a geomorphologist making fundamental contributions to our understanding of the geophysical forces that determine landscape evolution and of how our use of soils and rivers has shaped civilizations past and present. A prolific and versatile scientist, Montgomery’s numerous publications have explored how landslides and glacial erosion influence the height of mountains, how rivers originate and shape the landscape, and how human modification of river channels affects aquatic ecosystems, among other probing questions about the Earth’s surface. Unsettling conceived wisdom about environmental change at both the local and global levels, Montgomery’s field studies have taken him throughout the Pacific Northwest, his home and research base, to the Himalayas, the Andes, and the canyons of Mars (via data from NASA’s Mars Orbiter Laser Altimeter). For one major research program, he investigates the role of sediment and wood debris in altering stream and river channels and develops novel methods for measuring channel stability, anthropogenic disturbances, and conditions conducive to salmon spawning. In King of Fish: The Thousand-Year Run of Salmon (2003), a well-received book on the history of humans’ impact on salmon populations, Montgomery broadens the reach of his field studies beyond the scientific community by distilling his findings to support applied research on the ecological management of mountain rivers. His second book, Dirt: The Erosion of Civilizations (2007), chronicles the role of soil in the evolution of ancient and modern societies and offers a number of solutions to contemporary soil degradation worldwide. With a scientist’s rigor, a historian’s curiosity, and an environmentalist’s passion, Montgomery is leading investigations into the ecological consequences of a wide range of Earth surface processes.

David Montgomery received a B.S. (1984) from Stanford University and a Ph.D. (1991) from the University of California, Berkeley. He has been affiliated with the University of Washington since 1991, where he is currently a professor of geomorphology in the Department of Earth and Space Sciences. His numerous articles have appeared in such journals as Science, Nature, and Proceedings of the National Academy of Sciences USA.