Merging the traditional South Asian art of miniature painting with contemporary forms and styles to create visually compelling, resonant works on multiple scales and in a dazzling array of media. 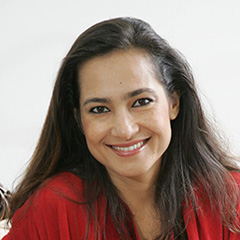 Shahzia Sikander is an artist whose visually striking, resonant works merge the traditional South Asian art of miniature painting with contemporary forms and styles. Her art ranges from intimate watercolors to mural-scale wall paintings and multi-layered paper installations, from intricate photographs to bold juxtapositions of painting and digital animation. Trained as a miniaturist at the National College of Arts in Lahore, Pakistan, Sikander recasts the conventions of this centuries-old tradition and challenges notions about the division of art and craft. While traversing cultural, geographic, and psychological boundaries and combining seemingly disparate formal elements, she skillfully expresses a respect for the distinctiveness of the cultures she explores. The results are painstakingly detailed drawings and vibrantly hued paintings that reveal themselves over time and reflect profoundly on the relationship between the present and the past and the richness of multicultural identities. In other projects, Sikander experiments with digital media to uproot the unity of her own miniatures and reposition their fragments with graceful movements of camera-work. This artist’s constant rethinking of media and visual sources makes her work a fluid, elaborately rendered commentary on diasporic experiences and our ever-changing world.

Shahzia Sikander received a B.F.A. (1991) from the National College of Arts, Lahore, Pakistan, and an M.F.A. (1995) from the Rhode Island School of Design. She was a fellow of the Glassell School of Art’s Core Program in Houston (1995-1997) and an artist-in-residence at Otis College of Art and Design in Los Angeles (2005). Her work has appeared in numerous solo and group exhibitions at such national and international venues as the Museum of Modern Art, New York, the Hirshhorn Museum and Sculpture Garden, the National Gallery of Canada, the Venice Biennale 2005, and the Musée d'Art moderne de la Ville de Paris.