Illustrator and Author | Class of 2006

Celebrating and explaining the nature of civilization’s greatest architectural and engineering achievements. 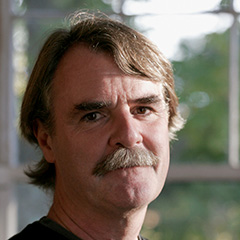 David Macaulay is a visual storyteller whose illustrated books demystify the workings and origins of objects as mundane as a stapler and as monumental as a cathedral. While he modestly classifies himself an “explainer,” Macaulay’s elegant drawings, wry humor, and clear descriptions of the simplest and most complex structures and machines are sophisticated and entertaining educational experiences for both children and adults. His profound curiosity has led him to deconstruct human creations to the simple and understandable, as exemplified by his architectural series of books, Cathedral (1973), Pyramid (1975), Castle (1977), and Mosque (2003). In The Way Things Work (1988), a seminal book in the field of illustrated-educational books, he not only shows the reader how things are made, but conveys complex technical information as to how and why they function. While best known for his books on architecture and engineering, Macaulay is also a gifted author of picture books. In his award-winning Black and White (1990), he abandoned linear storytelling to produce a book that challenges young readers to piece together four interconnected plots that unfold through illustrations in separate quadrants of each two-page spread. He is currently engaged in intensive study for his next book, an exploration of the complexities of the human body. Macaulay’s visually arresting and thought-provoking body of work invites readers of every age to perceive the world they occupy from surprising and compelling perspectives.

David Macaulay was born in Burton-on-Trent, England in 1946 and received a B.Arch. (1969) from the Rhode Island School of Design. A freelance writer and illustrator for the majority of his career, he has also worked as an interior designer (1969-72), as a high school art teacher (1969-70, 1972-74), and as an instructor at the Rhode Island School of Design, where he continues to teach as an an adjunct member of the Department of Illustration. His additional books include City: A Story of Roman Planning and Construction (1974), Underground (1976), Unbuilding (1980), Mill (1983), Ship (1993), Building Big (2000), and Angelo (2002), among many others. His work has been featured in a PBS mini-series as well as in museum exhibitions in the U.S. and Europe.