Modifying cutting-edge technologies to create affordable devices that aid the visually impaired and others underserved by traditional commerce. 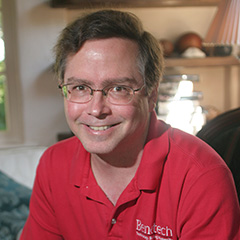 James Fruchterman is an electrical engineer-turned-entrepreneur who adapts cutting-edge technologies into affordable devices for the visually impaired and others underserved by traditional commerce. As a student, Fruchterman designed a reading machine for the blind using optical-character-recognition technology originally intended for military defense purposes. Determined to keep the cost of his reading machine within reach of the largest number of users, Fruchterman founded the non-profit company, Arkenstone, to develop and manufacture the system. He has since delivered this reading tool in a dozen languages to people in 60 countries and created a stream of other inventions for the visually impaired, including Open Book, a PC software program that reads scanned texts ranging from school books to utility bills, Atlas Speaks map software, and Strider, a talking GPS locator. In 2000, Fruchterman founded another non-profit, Benetech, as an incubator for socially-oriented technology applications. With Bookshare.org, Benetech has created a web-based library of scanned books to provide people with visual or learning disabilities downloadable access to a dramatically increased volume of printed materials. Other initiatives include Martus, a secure, computer-based reporting system to assist the human rights sector in collecting, safeguarding, and disseminating information about human rights violations, and a Landmine Detector Project with the goal of placing state-of-the-art detection devices in the hands of humanitarian deminers in war-torn countries. Fruchterman puts existing technologies to use in innovative ways to make life-changing machines for those who need them most.

James Fruchterman received a B.S. (1980) in engineering  and an M.S. (1980) in applied physics from the California Institute of Technology and pursued doctoral studies at Stanford University (1980-1981). Prior to founding Benetech, where he serves as president, CEO, and chairman, he was president, CEO, and chairman of Arkenstone, Inc. (1989-2000) and co-founder and vice president of Calera Recognition Systems, Inc. (1982-1989). Fruchterman also served as co-founder and CFO of RAF Technology, Inc. (1989-2004).

Jim Fruchterman is currently CEO of Benetech. He received the California Institute of Technology’s Distinguished Alumni Award in 2013 and was on the original drafting team of what became the Marrakesh Treaty in 2013.