Marrying conservatory training with a broad range of eclectic influences to invent a modern repertoire for the violin in contemporary and improvisational music. 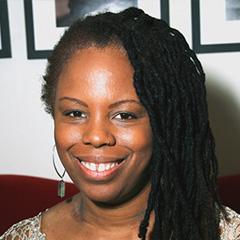 Regina Carter is a master of improvisational jazz violin. Though her work draws upon a wide range of musical influences — including Motown, Afro-Cuban, swing, bebop, folk and world music — she has crafted a signature voice and style. In jazz, bowed string instruments such as the violin are not traditionally featured in the solo role; Carter’s performances highlight the often overlooked potential of the jazz violin for its lyric, melodic, and percussive potential. Her early training as a classical musician is reflected in the fluidity, grace, and balance of her performance.  Carter’s repertoire retains a firm connection with the familiar while venturing in new, unexpected directions. On recordings such as Motor City Moments (2000), where she overlays swing with a soulful sound, and Freefall (2001), a collaboration with jazz legend Kenny Barron, Carter taps into a broad musical vocabulary to weave new sound tapestries. In live performances with jazz veterans and in ensembles, she captivates her audience with the passion and spirit of adventure intrinsic to her approach to music. Through artistry with an instrument that has been defined predominantly by the classical tradition, Carter is pioneering new possibilities for the violin and for jazz.

Regina Carter studied violin performance at the New England Conservatory of Music and received a B.A. (1985) in music from Oakland University in Rochester, Michigan. Her additional solo recordings include Regina Carter (1995), Something for Grace (1997), Rhythms of the Heart (1999), Paganini: After a Dream (2002), and I’ll Be Seeing You: A Sentimental Journey (2006). Carter has performed at venues throughout the United States and Europe, including Lincoln Center’s Alice Tully Hall, the John F. Kennedy Center for the Performing Arts, and Teatro Carlo Felice, Genoa, Italy.