Weaving the conventions of noir mysteries, westerns, science fiction, and comic books into narratives that explore the relationship between high art and popular culture. 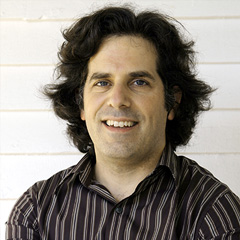 Jonathan Lethem is the author of six novels, a novella, two short story collections, and a volume of essays that explore, in various ways, the relationship between so-called high art and popular culture. Characterized by narrative leaps between vastly divergent genres, his fiction weaves the conventions of noir mysteries, westerns, science fiction, and comic books into coming-of-age tales that are otherwise evocative and realistic in content. In his most recent novel, Fortress of Solitude (2003), he depicts the intricate codes of childhood street life he navigated while growing up in the Boerum Hill section of Brooklyn during the 1970s, a time when the neighborhood was gentrifying and rife with race and class tensions. Demonstrating keen powers of observation and description, he embeds his readers deeply within the physical and social worlds his characters inhabit, in the schoolyards, on the stoops, and in the midst of the energetic dialogue and pop riffs that pulse throughout. While comic book motifs appear in Fortress, Lethem’s earlier novel, Motherless Brooklyn (1999), takes the form of a detective story that is ceaselessly interrupted by the outbursts of its highly unconventional narrator, a Tourettes-plagued private investigator named Lionell Essrog. By orchestrating such allusions to popular genres within his fiction, Lethem heightens emotional engagement with his characters, blurs boundaries across a broad spectrum of cultural creations, and expands the frontier of American fiction.

Jonathan Lethem studied at Bennington College (1982-84) and immersed himself in the culture of literature by working as a bookseller at numerous bookshops in New York City and in Berkeley, California. His other novels include Gun, with Occasional Music (1994), Amnesia Moon (1995), As She Climbed Across the Table (1997), and Girl in Landscape (1998). He is also the author of the story collections, The Wall of the Sky, the Wall of the Eye (1996) and Men and Cartoons (2005), the novella, This Shape We're In (2001), and the essay collection, The Disappointment Artist and Other Essays (2005) and is editor of an anthology of stories, The Vintage Book of Amnesia (2000). His writings have appeared in numerous periodicals, including The New Yorker, Rolling Stone, and McSweeney's.