Probing the complexities of synaptic transmission in the brain, gaining new insights into the processes of learning and memory. 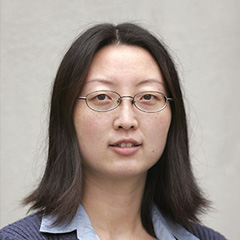 Lu Chen is a neuroscientist who is probing the mysteries of the synapse, the anatomical structure that mediates chemical signals sent from one neuron to another. Specifically, she explores the mechanisms underlying the function of synapses that use the neurotransmitter glutamate (the most common excitatory neurotransmitter in the central nervous system). This transmitter interacts with postsynaptic neurons with several different types of receptors: kainate, NMDA, and AMPA. Studies of a genetically mutated mouse strain showed that AMPA receptor function is disrupted by the lack of stargazin, a protein homologous with a subunit of the calcium channel. Through a combination of molecular genetic, cell biology, biochemical, and electrophysiologic approaches, Chen and her colleagues were able to demonstrate that stargazin plays a key role in the structural integrity of the AMPA receptor complex. Chen created a line of non-neuronal cells that express each of the AMPA receptor components; in co-culture with hippocampal neurons, she showed that the neurons induced the formation of functional AMPA receptors in the non-neuronal cell line, and that stargazin represents an essential element of the receptor assembly. This observation opens a new avenue for exploring the role of accessory proteins in synaptic formation and plasticity. The potential impact is tremendous not just for understanding the basic biology of learning and memory, but also in the development of new kinds of treatments for neurological and psychiatric diseases.