Responding to changing market demands in the best spirit of American entrepreneurship by finding contemporary solutions to the challenges facing family farms in America. 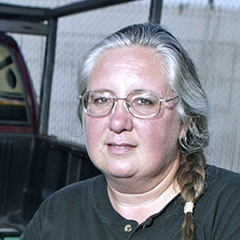 Cheryl Rogowski is reinventing the role of the family farm in America. Under great pressure from consolidation in industrial agriculture and shifting trade policies, Rogowski overhauled her family farm, moving away from a single-crop specialization to provide a variety of vegetables and fruits that serve the needs of regional and specialty markets (where the demand is often not high enough to attract the attention of the agricultural giants). Though commercial survival and success have depended on innovation in cultivation, capital investment, and marketing, Rogowski recognized that the health of her business depends even more on the vitality of the marketplace. She has been at the vanguard of creating and participating in Community Supported Agricultural programs (CSAs) in her own community and in New York City and in experimenting with individual CSAs for targeted groups as disparate as Hispanics, seniors, and soup kitchens. She also plays a key role in the New Farmer Development Project, mentoring immigrant farmers seeking to establish their own farms. Other efforts, such as literacy programs for migrant farm workers and public art exhibitions in support of local foods, demonstrate her commitment to finding contemporary solutions to the challenges facing family farms in the United States. Rogowski is an entrepreneur who has revitalized the character of family farming as a commercial enterprise and as an engine of community development.

Cheryl Rogowski received an A.S. (1981) from Orange County Community College and a B.S. (1984) from Mount St. Mary College. In addition to managing the fifty-year-old Rogowski Family Farm since 1977, Rogowski was instrumental in launching the Warwick Valley Farmers’ Market in 1993 and established the first low-income CSA in New York State in 1998. She has also served on the boards of directors for the Warwick Valley Chamber of Commerce, the New York State Direct Farm Market Federation, and the Foundation of Future Farmers of America.