Fusing the roles of marketplace and community center to inspire appreciation of literature and preserve Latino literary heritage. 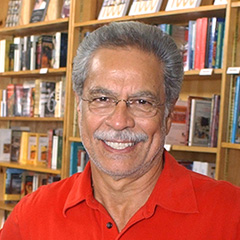 Rueben Martinez has elevated bookselling from a business to a campaign in support of underserved populations in California and throughout America. His Santa Ana bookstore, Libreria Martinez Books and Art Gallery, was originally a barbershop and is now among the largest commercial sellers of Spanish-language books in the country, serving as the cornerstone of cultural events and community activities that promote the benefits of reading to Hispanic-Americans and Spanish-speaking immigrants. A co-founder of the Latino Book Festival (which now tours nationally), Martinez motivates Spanish-speaking people to value literature, to read for themselves, and to read to their children. The record number of enthusiastic adults and children drawn to Libreria Martinez makes the store a destination for leading bilingual and Latino authors. Acclaimed by educators and librarians throughout the country, Martinez’ unique brand of entrepreneurship and advocacy is an important complement to institutional and program efforts to enrich and anchor the lives of a large and growing population in America.

Rueben Martinez has been a professional barber and entrepreneur for more than forty years. In 1993, he founded Libreria Martinez Books and Art Gallery, a small business operating out of his barbershop. By 1999, the bookstore had expanded and moved into its own location, and, in 2001, he launched a second venue dedicated to children’s literature. Martinez is a founding member of Santa Ana’s Reading City Committee. In 1997, he helped develop the multi-city Latino Book Festival.