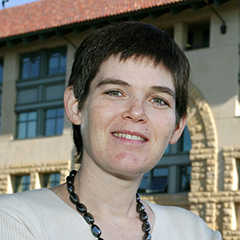 Daphne Koller is a computer scientist who has developed new computational methods for representing knowledge and reasoning at the intersection of traditional logic, probability, uncertainty, and subjective judgment. Her work bridges a longstanding divide in the field of artificial intelligence between efforts to develop an explicit representation of knowledge (for example, in medical diagnosis) and efforts to categorize data based on statistical properties (such as optical character recognition). Koller significantly expanded the utility of Bayesian networks—computational devices for reasoning based on uncertain information—by showing how these structures can be organized in hierarchical, object-oriented networks. She and her colleagues advanced this one step further by developing "probabilistic relational models", admixtures of logical and statistical representations that can implement standard deductive reasoning without exhibiting the fragility of earlier systems to incorrect, incomplete, or uncertain inputs. Probabilistic relational models are capable of extracting knowledge embedded in large databases into a form that can be used for abstract reasoning. These advances find direct application in areas such as commerce, security, and biomedical research; for example, probabilistic relational models have been used to analyze the yeast genome, identifying regulatory roles for several proteins whose function had been previously uncharacterized. Through her research in graphical modeling, Koller has demonstrated the power of probabilistic methods for tackling the hardest problems in knowledge representation, inference, and learning.

Daphne Koller received a B.Sc. (1985) and a M.Sc. (1986) from the Hebrew University of Jerusalem and a Ph.D. (1993) from Stanford University. Koller was a postdoctoral fellow (1993-1995) at the University of California, Berkeley. In 1995, she joined the Department of Computer Science at Stanford University as an assistant professor and, in 2001, became an associate professor. Her research has been published in journals such as Games and Economic Behavior, Artificial Intelligence, Science, and Nature Genetics.