Developing the means to measure thousands of genes simultaneously in an effort to decode the mysteries of cellular function. 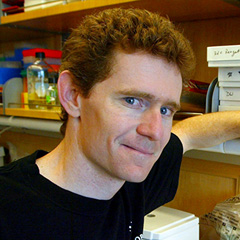 Joseph DeRisi is a molecular biologist who develops and uses new technologies for exploring the complex, interdependent pathways regulating gene expression. He extends the impact of recent advances in DNA sequencing by examining not just the population of genes within a cell, but also their interactions that lead to complex behaviors. DeRisi uses glass slides, carefully prepared with spots of DNA, arranged by robotic devices in a microarray, to make hundreds and even thousands of measurements of individual gene expression from a single experimental sample. His studies on the most common type of malaria parasite have revealed an unusual pattern of synchronized gene activity. This observation suggests that the infectious agent may be particularly sensitive to drugs that disrupt the gene synchronization necessary to move into the next phase of its life cycle. DeRisi has also demonstrated the power of microarrays for rapid characterization of unknown viral strains; he and colleagues used this method to identify and characterize a novel coronavirus responsible for the outbreak of Severe Acute Respiratory Syndrome (SARS) in early 2003. By enhancing methods for bulk measurement of gene activity and applying this technology to questions of vital biological and medical interest, DeRisi demonstrates the vast potential for discoveries in molecular genetics to decode the mysteries of cellular function and to advance the diagnosis and treatment of disease.

Joseph DeRisi received a B.A. (1992) from the University of California, Santa Cruz, and a Ph.D. (1999) from Stanford University. He was a postdoctoral fellow (1999–2000) and an assistant professor (2000–2004) in the Department of Biochemistry and Biophysics at the University of California, San Francisco; in 2004, he was promoted to his current position as an associate professor. His research has been published in such academic journals as Science, Nature Medicine, Proceedings of the National Academy of Sciences USA, and PLoS Biology.